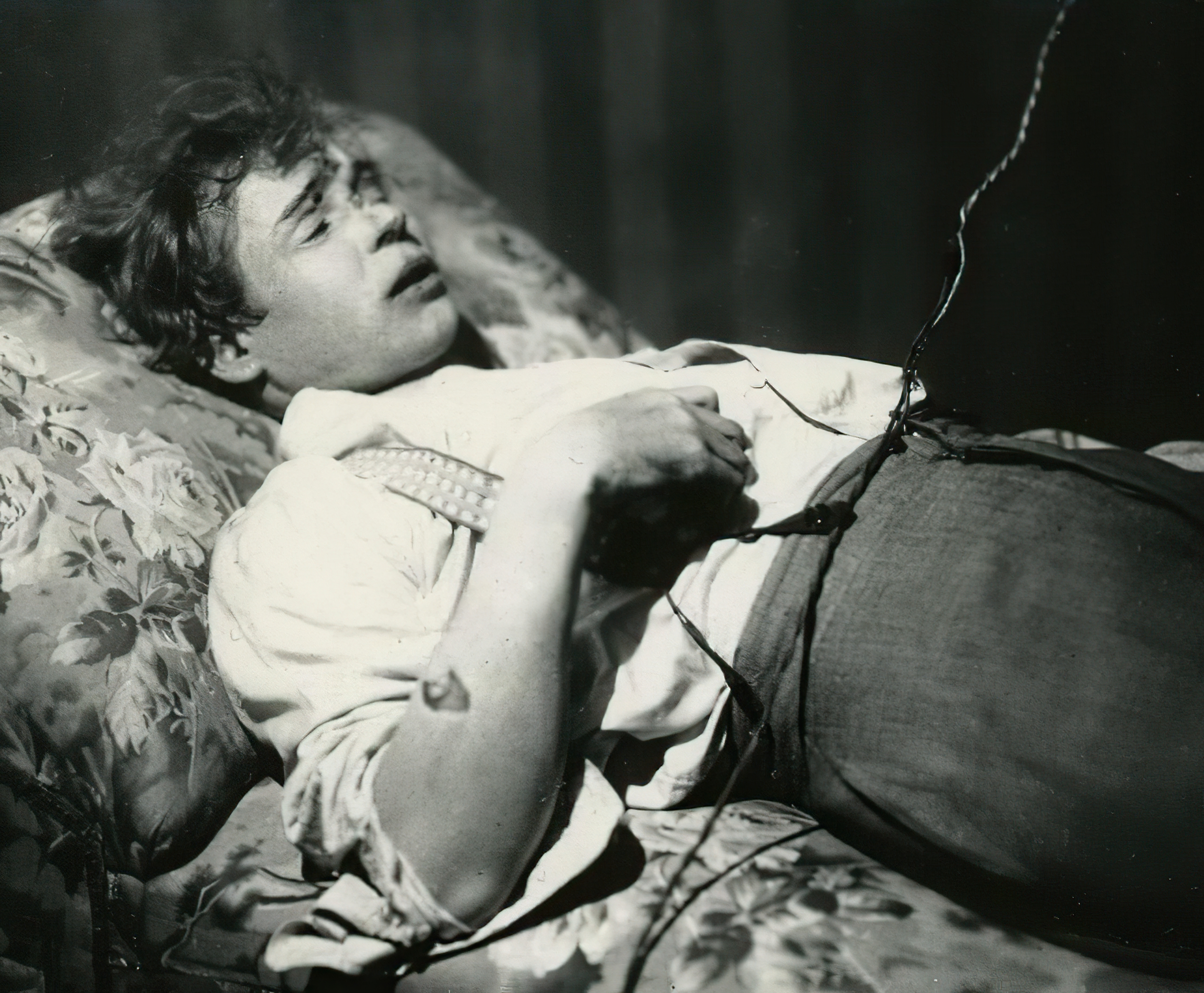 Sergei Yesenin was born in Konstantinovo in Ryazan Governorate of the Russian Empire to a peasant family. He spent most of his childhood with his grandparents, who essentially raised him. He began to write poetry at the age of nine.

In 1912, Yesenin moved to Moscow, where he supported himself working as a proofreader in a printing company. The following year he enrolled in Moscow Charnyavsky University as an external student and studied there for a year and a half. His early poetry was inspired by Russian folklore. In 1915, he moved to Petrograd, where he became acquainted with fellow-poets Alexander Blok, Sergey Gorodetsky, Nikolai Klyuev and Andrei Bely and became well known in literary circles. Blok was especially helpful in promoting Yesenin's early career as a poet. Yesenin said that Bely gave him the meaning of form while Blok and Klyuev taught him lyricism.

In 1916, Yesenin published his first book of poems, Radunitsa (Russian: Радуница). Through his collections of poignant poetry about love and the simple life, he became one of the most popular poets of the day. His first marriage was in 1913 to Anna Izryadnova, a co-worker from the publishing house, with whom he had a son, Yuri.

From 1916 to 1917, Yesenin was drafted into military duty, but soon after the October Revolution of 1917, Russia exited World War I. Believing that the revolution would bring a better life, Yesenin briefly supported it, but soon became disillusioned. He sometimes criticised the Bolshevik rule in such poems as The Stern October Has Deceived Me.

In August 1917 Yesenin married for a second time to Zinaida Raikh (later an actress and the wife of Vsevolod Meyerhold). They had two children, a daughter Tatyana and a son Konstantin. The parents quarreled and lived separately for some time prior to their divorce in 1921. Tatyana became a notable writer, and Konstantin Yesenin would become a well-known soccer statistician.

In September 1918, Yesenin founded his own publishing house called "Трудовая Артель Художников Слова" (the "Labor Company of the Artists of the Word"). Together with Anatoly Marienhof, they founded the Russian literary movement of imaginism. In the fall of 1921, while visiting the studio of painter Georgi Yakulov, Yesenin met the Paris-based American dancer Isadora Duncan, a woman 18 years his senior. She knew only a dozen words in Russian, and he spoke no foreign languages. They married on 2 May 1922. Yesenin accompanied his celebrity wife on a tour of Europe and the United States. His marriage to Duncan was brief and in May 1923, he returned to Moscow.

In 1923 Yesenin became romantically involved with the actress Augusta Miklashevskaya to whom he dedicated several poems. The same year he had a son by the poet Nadezhda Volpin. Their son, Alexander Esenin-Volpin grew up to become a poet and a prominent activist in the Soviet dissident movement of the 1960s. Since 1972 till his death in 2016, he lived in the United States, a famous mathematician and teacher.

In 1925 Yesenin met and married his fourth wife, Sophia Andreyevna Tolstaya (1900-1957), a granddaughter of Leo Tolstoy.

As Yesenin's popularity grew, rumors began to circulate about his heavy drinking and alcohol-fueled public outbursts. Fellow poet Vladimir Mayakovsky, wrote that after his return from America Yesenin became more visible in newspaper police log sections than in poetry.

On 28 December 1925 Yesenin was found dead in his room in the Hotel Angleterre in St Petersburg. His last poem Goodbye my friend, goodbye (До свиданья, друг мой, до свиданья) according to Wolf Ehrlich was given to him the day before. Yesenin complained that there was no ink in the room, and he was forced to write with his blood. Yesenin's corpse in his hotel room

According to the consensus among academic researchers of Yesenin's life, the poet was in a state of depression a week after he escaped from a mental clinic and committed suicide by hanging.

After the funeral in the Union in Leningrad, poet Yesenin's body was transported by train to Moscow, where a farewell for relatives and friends of the deceased was also arranged. He was buried December 31, 1925, in Moscow's Vagankovskoye Cemetery. His grave is marked by a white marble sculpture.

A theory exists that Yesenin's death was actually a murder by NKVD agents who staged it to look like suicide. The novel Yesenin published by Vitali Bezrukov is devoted to this version of Yesenin's death. In 2005 TV serial Sergey Yesenin based on this novel (with Sergey Bezrukov playing Yesenin) was shown on Channel One Russia. The film was criticized by forensic experts who found its arguments unconvincing.

Facts tending to support the assassination hypothesis were discovered by Stanislav Kunyaev and Sergey Kunyaev in the final chapter of their biography of Yesenin. Among them:

1) At the time of his death, Yesenin was actively working on his collected works. He was not drinking after his departure from Moscow and was enthusiastic about leaving the capital and working on other new texts. A project he was dreaming about was close to success: to start editing a literature magazine of his own. Most of his manuscripts were missing from his hotel room and had never been discovered (including his recently announced novella known under the work title When I was a boy… and his winter poems from the last months). Yesenin preferred to be well ordered in his work; but his hotel room was in extreme chaos, with his things scattered on the floor and with signs of a fight.

2) Yesenin had a fresh wound on his shoulder, one on his forehead and a bruise under one of his eyes. A few weeks before his death, many of his friends claimed that he had been carrying a revolver, but this weapon was never discovered. His jacket was missing, and he had to be covered with a sheet from the hotel. The ligature with which he purportedly hanged himself, made from a belt that later disappeared, was reportedly not a hanging one: it was only holding the body to one side, to the right. Nevertheless, no further investigations were documented to have been made in this direction. The room where he died was also not examined.

3) The photos of the hotel room and the body were not made by a police photographer. None of his close friends (e.g. Klyuev, Valerian Pravduhin, Ilya Sadofiev) was taken to see the room. Neither were they officially interrogated, while Ehrlich reportedly did not seem aggrieved by the events (Ehrlich was sentenced to death and shot in 1937). The work known as his last poem is sometimes considered as written in 1924 and dedicated to the fellow poet Viktor Manuilov.

4) The medical documentation does not include the supposed hour of death. Later experts considered it careless and point out that the language is uncharacteristic for an experienced doctor like the one involved, Alexander Gilyarevsky, who died in 1931.

5) The fact that Yesenin remained in the Hotel Angleterre, where there was a regular strong police presence, is still unexplained, given the poet’s late negativism towards the authorities and his persistent feeling that they were following him and threatening him, shared with friends on various occasions. Moreover, he was not registered in the hotel, as well as his friend, the writer Georgy Ustinov, which may be interpreted as a sign that the visit may have already been prepared and planned by others. (Georgy Ustinov also reportedly killed himself in 1932.)

The Ryazan State University is named in his honour.

Yesenin's suicide triggered an epidemic of copycat suicides by his mostly female fans. For example, Galina Benislavskaya, his ex-girlfriend, killed herself by his graveside in December 1926. Although he was one of Russia's most popular poets and had been given an elaborate state funeral, some of his writings were banned by the Kremlin during the reigns of Joseph Stalin and Nikita Khrushchev. Nikolai Bukharin's criticism of Yesenin contributed significantly to the banning. Only in 1966 were most of his works republished. Today Yesenin's poems are taught to Russian schoolchildren; many have been set to music and recorded as popular songs. His early death, coupled with unsympathetic views by some of the literary elite, adoration by ordinary people, and sensational behavior, all contributed to the enduring and near mythical popular image of the Russian poet. Monument to Yesenin in Ryazan

A monument to Yesenin opened in St. Petersburg in 1995.

In 2005 Russian studio Pro-Cinema Production produced a TV mini-series Yesenin about the life of the poet.[1] The movie described the version of his death according to which he was murdered by NKVD agents who staged his suicide. In the mini-series Yesenin was portrayed by Sergey Bezrukov.

Sergei Yesenin's final poem was a major inspiration for the Bring Me the Horizon song "It Was Written In Blood" on their album Suicide Season.