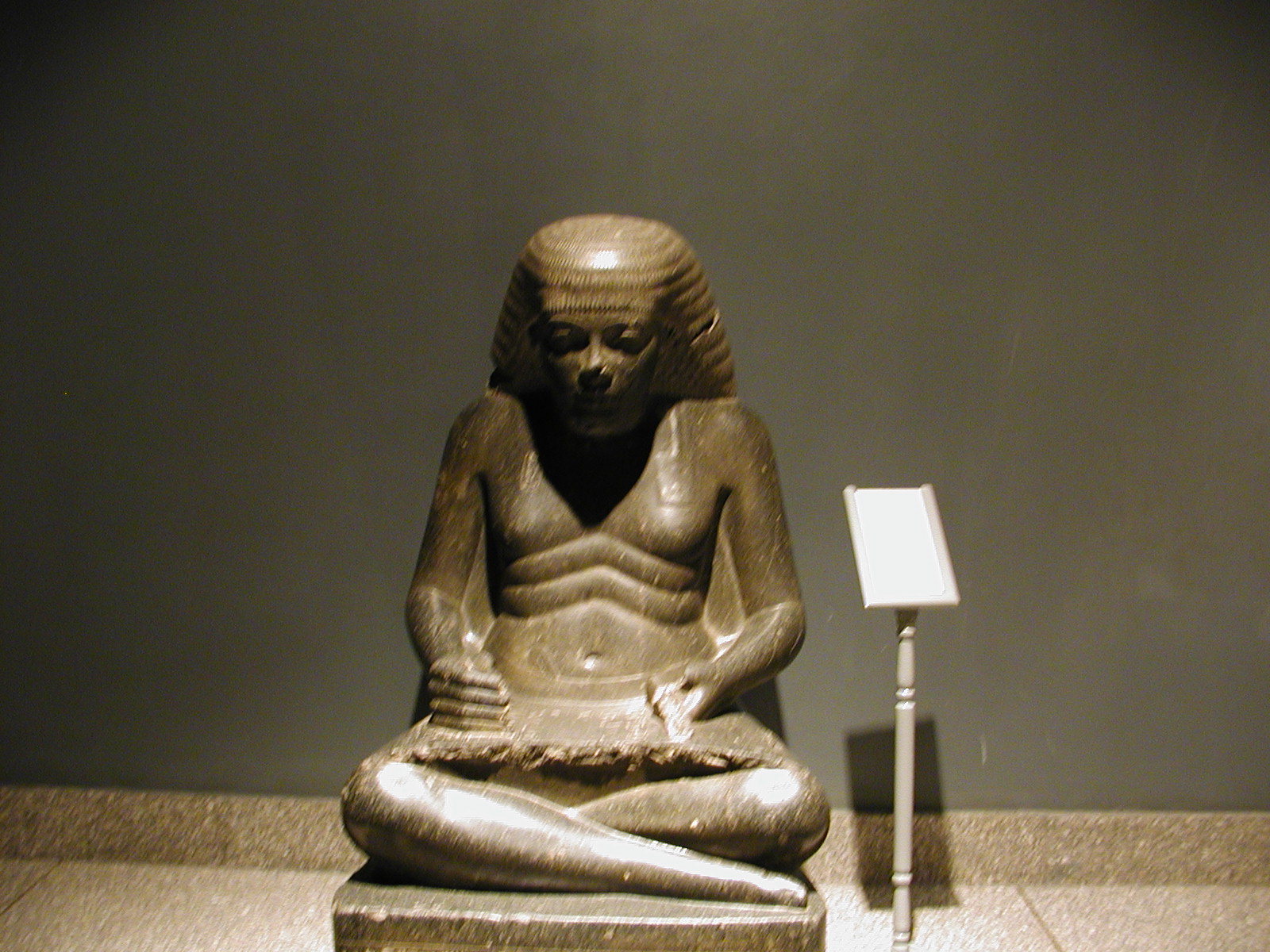 A scribe is a person who writes books or documents by hand in hieratics, cuneiform or other scripts and may help keep track of records for priests and government.

The profession, previously found in all literate cultures in some form, lost most of its importance and status with the advent of printing. The work could involve copying books, including sacred texts, or secretarial and administrative duties, such as taking of dictation and the keeping of business, judicial and, historical records for kings, nobles, temples, and cities. Later the profession developed into public servants, journalists, accountants, typists, and lawyers. In societies with low literacy rates, street-corner letter-writers (and readers) may still be found providing a service.

The most important was a person educated in the arts of writing (using both hieroglyphics and hieratic scripts, and from the second half of the first millennium BCE the demotic script, used as shorthand and for commerce) and arithmetics. Sons of scribes were brought up in the same scribal tradition, sent to school and, upon entering the civil service, inherited their fathers' positions.

Much of what is known about ancient Egypt is due to the activities of its scribes and the officials. Monumental buildings were erected under their supervision, administrative and economic activities were documented by them, and tales from the mouths of Egypt's lower classes or from foreign lands survive thanks to scribes putting them in writing.

Scribes were also considered part of the royal court, were not conscripted and did not have to pay taxes. The scribal profession had companion professions, the painters and artisans who decorated reliefs and other relics with scenes, personages, or hieroglyphic text. A scribe was exempt from the heavy manual labor required of the lower classes, or corvee labor.

The hieroglyph used to signify the scribe, to write, and "writings", etc., is Gardiner sign Y3, from the category of: 'writings, & music'. The hieroglyph contains the scribe's ink-mixing palette, a vertical case to hold writing-reeds, and a leather pouch to hold the black and red ink blocks.

Thoth was a god associated by the Ancient Egyptians with the invention of writing, being the scribe of the gods, and holding knowledge of scientific and moral laws.

This early New Kingdom statue commemorates the scribe Minnakht ("Strength of Min") and demonstrates how ancient scribes read papyri— in a seated position on the floor with the text on their lap. Walters Art Museum, Baltimore.

In ancient Egypt, an example of this is the Dispute between a man and his Ba. Some of the stories, the "wisdom literatures" may have just started as a 'short story', but since writing had only recently been invented, it was the first physical recordings of societal ideas, in some length and detail. In Mesopotamia, the Sumerians had one of the beginnings of this literature in the middle to late 3rd millennium BC, and besides their creation stories and religious texts, there is a series of debates. An example from the small list of Sumerian disputations is the debate between bird and fish. In the other Sumerian disputes, in the Debate between Summer and Winter, Winter wins. The other disputes are: cattle and grain, the tree and the reed, Silver and Copper, the pickax and the plough, and millstone and the gul-gul stone.

As early as the 11th century BCE, scribes in Ancient Israel, as in most of the ancient world, were distinguished professionals who could exercise functions which in modern society would be associated with lawyers, government ministers, judges, or financiers. Some scribes also copied documents, but this was not necessarily part of their job. Jewish scribes at the Tomb of Ezekiel in Iraq, ca. 1914

The Jewish scribes used the following process for creating copies of the Torah and eventually other books in the Tanakh.

Sofers (Hebrew: סופר סת”ם‎‎) are among the few scribes that still ply their trade by hand. Renowned calligraphers, they produce the Hebrew Torah scrolls and other holy texts by hand to this day. They write on parchment.

Until 1948, the oldest manuscripts of the Hebrew Bible dated back to 895 A.D. In 1947, a shepherd boy discovered some scrolls inside a cave West of the Dead Sea. These manuscripts dated between 100 B.C. and 100 A.D. Over the next decade, more scrolls were found in caves and the discovery became known as the Dead Sea Scrolls. Every book in the Hebrew Bible was represented in this discovery except Esther. Numerous copies of each book were discovered, such as the 25 copies of Deuteronomy that were found.

While there are other items found among the Dead Sea Scrolls not currently in the Hebrew Bible, the texts on the whole testify to the accuracy of the scribes copying down through the ages, though many variations and errors occurred. The Dead Sea Scrolls are currently the best route of comparison to the accuracy and consistency of translation for the Hebrew Bible, due to their date of origin being the oldest out of any Biblical text currently known.