Born in Norfolk, Virginia, Travis was a well-known drummer in the local music scene of a region known as Hampton Roads during the early 1980s. Playing with bands in clubs throughout Norfolk, Virginia Beach, and Newport News. Travis moved to California in the early to mid-1980s and performed in various local bands, such as Hawk, later moving on to perform for the critically acclaimed band Racer X, and very briefly performed in Saints Or Sinners, which later changed their name to The Scream, and also featured Travis's Racer X bandmates Bruce Bouillet and Juan Alderete. His big career move came about late in the decade after Judas Priest's longtime drummer Dave Holland left the band in 1989, citing personal reasons.

Travis had always wanted to be the drummer of Judas Priest. As a teenager, he had often thought about setting up his drum kit in the parking lot at the Hampton Coliseum in hopes that the band would notice him as they went past with their tour bus. He finally decided to wait at the back of the arena to hand the band a tape of his playing. Holland was still the band's drummer at the time, so nothing ever came out of the encounter. When Holland did leave Judas Priest in 1989, vocalist Jeff Martin heard about it through his friendship with Rob Halford. Martin called up Travis one day and said, "Guess who needs a drummer." Travis auditioned for the vacant position and became their new member, thus becoming the first non-Briton to perform for the band. He has been with the band ever since and also handles drum duties for Racer X as well. Travis also performed drums in Halford's band Fight from 1992 to 1995, but to date, he is best known for his work with Judas Priest, for which he has been widely acclaimed ever since his debut on the 1990 album Painkiller.

Travis was largely responsible for hiring Tim 'Ripper' Owens as Halford's replacement in Judas Priest in 1996. Owens would remain in the band until the 2003 reunion with Halford.

Travis takes credit as the co-writer for the song "Cyberface", which appears on Judas Priest's 2001 album Demolition, making it his first and only contribution in the band.

In April 2016, Travis joined the reformed line-up of Thin Lizzy for reunion shows and has remained in the band as their official member.

He is commonly mistaken to be left-handed. In reality, he is ambidextrous, and plays with an open style.

The contents of this page are sourced from Wikipedia article on 05 Aug 2020. The contents are available under the CC BY-SA 4.0 license.
View Scott Travis 's image gallery
Image Gallery 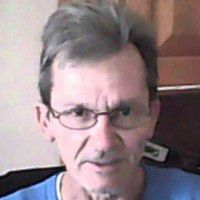