Sári Barabás was born in Budapest. She planned to be a dancer, but after an injury she turned to singing. She studied in Budapest with Frau Speckler, and made her debut at the Budapest Opera in 1939, as Gilda in Rigoletto. World War II interrupted her career. After the war, she appeared at the Zurich Opera and the Vienna Volksoper, and then joined the Munich State Opera in 1949, where she remained until 1971, she was also a regular guest at the Vienna State Opera, where she established a reputation as a soprano of agility and glamorous personality.

She made guest appearances as Gilda, at the Royal Opera House in London, and at the Glyndebourne Festival, where she sang Konstanze in Die Entführung aus dem Serail, Adele in Le comte Ory, and Zerbinetta in Ariadne auf Naxos to great acclaim. She made her American debut at the San Francisco Opera in 1950, as the Queen of the Night in The Magic Flute. She also sang operetta, and enjoyed considerable success in London in 1969, in a revival of the musical The Great Waltz. She retired from the stage in 1973. 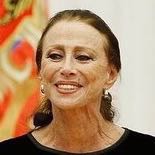