Sargis Shahnazar Araratyan (Armenian: Սարգիս Արարատյան, 1886-1943) was an Armenian politician who served as Minister of Finance of the First Republic of Armenia from 1919 to 1920 and Minister of Social Protection in 1920. Sargis Araratyan was a chemist by profession, as well as a public figure, a statesman and a prominent politician, a member of the ARF (Armenian Revolutionary Federation). He lived in Baku and took an active role in the Armenian National life. In 1918, he was elected a member of Baku City Council and sent to Persia for negotiations on the future of Baku. In late 1918, after Armenia gained independence he moved to Yerevan. From 1919 to 1920, Araratyan was elected a member of the ARF Bureau, and a member of Parliament. He held the post of the Minister of Finance and also the Minister of Provisions (08.1919-05.1920). In the period of 05.1920-12.1920 he was the Minister of Assistance and Reconstruction. He left Yerevan in 1920, lived in Bucharest, Romania. 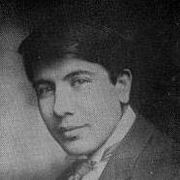