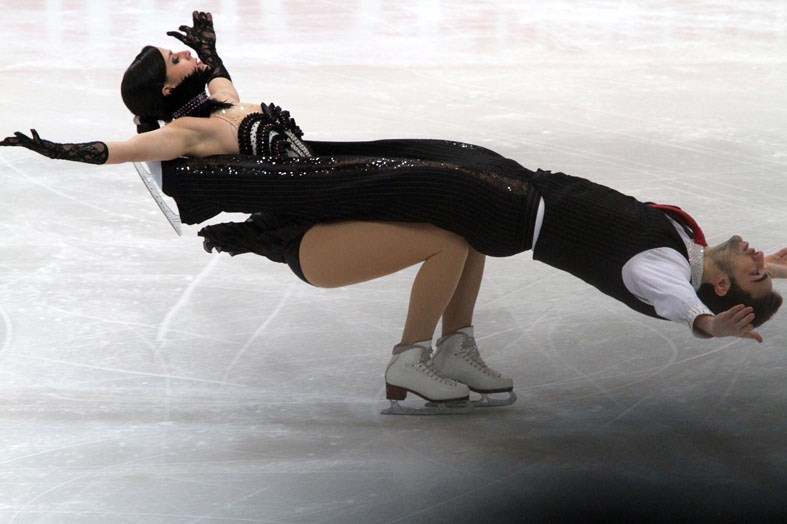 Sara Hurtado (born 3 November 1992) is a Spanish ice dancer who skates with Kirill Khaliavin. With former partner Adrià Díaz, she won four senior international medals. Hurtado and Diaz were the first dance team to represent Spain in ISU competition and the first to qualify for the Olympics. Hurtado is a six-time Spanish national champion, five times with Díaz and once with Khaliavin.

Sara Hurtado was born 3 November 1992 in Madrid. She studied journalism at Universidad Francisco de Vitoria before moving to Canada. In 2016, she enrolled at the British School of Art and Design in Moscow.

Hurtado began skating in 2001. Her mother signed her up for lessons when an ice rink opened nearby.

She switched from singles to ice dancing when Adrià Díaz asked her to skate with him. The Spanish skating federation hired coach John Dunn to develop an ice dancing program in Madrid in early 2008.

Hurtado/Díaz began competing together internationally in the 2008–09 season. Their first major international event was the 2009 World Junior Championships where they finished 32nd.

They competed in two events on the Junior Grand Prix circuit and finished 16th at the 2010 World Junior Championships.

Hurtado/Díaz competed on the Junior Grand Prix circuit, while also taking part in several senior internationals. They finished 15th at the 2011 European Championships, won a bronze medal at the Bavarian Open, and finished fourth at the Winter Universiade. They moved up to ninth at Junior Worlds. They went on to their first senior Worlds, where they qualified for the short dance out of the preliminary round but were unable to reach the free dance portion of the event.

Hurtado/Díaz moved to London, England in mid-2011 after Dunn accepted a coaching job in his native country. In December 2011, they ended their relationship with Dunn and relocated to Montreal, Quebec, Canada to train under Marie-France Dubreuil and Patrice Lauzon.

At the 2013 Nebelhorn Trophy, Hurtado/Díaz became the first ice dancers to qualify an Olympic entry for Spain. In January 2014, they competed at the 2014 European Championships and finished 10th, allowing Spain to send two ice dancing teams to the next Europeans. One month later, Hurtado/Díaz competed at the Winter Olympics, where they set personal best scores in both segments and finished in 13th place.

Hurtado/Díaz achieved their best results in the 2014–15 season, finishing 5th at the 2015 Europeans with a new personal best score and 14th at Worlds.

Hurtado/Díaz were invited to two Grand Prix events – the 2015 Trophée Éric Bompard and the 2015 Rostelecom Cup. However, on October 16, 2015, Hurtado announced on her personal Facebook page that she had decided to end the partnership. In a later interview, Hurtado stated that their partnership had had problems for a while and that therapy had not helped resolve these issues.

In 2016, Hurtado teamed up with Kirill Khaliavin, who was released to skate for Spain in September of the same year. The two are coached by Alexander Zhulin in Moscow. They made their international debut in December 2016, winning gold at the Santa Claus Cup in Hungary.

Hurtado and Díaz at the 2012 Nebelhorn Trophy.

Hurtado and Díaz perform a lift at the 2011 European Championships.