Santhosh Keezhattoor is an Indian film & theater actor who appears in Malayalam films. He had acted in many leading and supportive roles. He won acclaim though doing character roles. Santhosh Before entering into the film industry was working as a theater artist, and a programme producer.

Santhosh had won wide acclaim for his solo drama that narrates the life of Ochira Velu asan.

Among the theater ventures of Santhosh, Pen Nadan (പെൺ നടൻ) won large scale critical acclaim. Pen Nadan is his theater interpretation of the life and times of Ochira Sivaprasad C Velukutti alias Velu Kutti Asan, who don many remarkable women characters in the evolving years of Malayalam theatre. Velukutti had metamorposed as many women characters of legendary poet Kumaran Asan on stage and they include Vasavadatta, Nalini, Seetha, Leela and Mathangi.

The contents of this page are sourced from Wikipedia article on 08 Aug 2020. The contents are available under the CC BY-SA 4.0 license.
View Santhosh Keezhattoor 's image gallery
Image Gallery 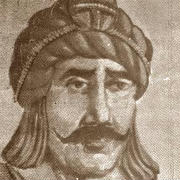