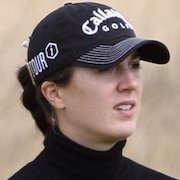 Sandra Gal (born 9 May 1985) is a German professional golfer who currently plays on the United States–based LPGA Tour.

Born in Düsseldorf, Germany, Gal began playing golf at age five during family vacations to golf resorts around Europe. At age 17 she joined the German National Team and at 18 won the German National Girls Championship. She graduated from high school in 2004.

While still competing on the German National Team, Gal attended college in the United States at the University of Florida in Gainesville. She played for the Florida Gators women's golf team from 2005 to 2007 and won four events in NCAA competition, received First Team All-American honors in 2007, and was an NGCA Academic All-American from 2005 to 2008.

In 2007, she won the Ladies European Amateur, and later that fall, entered the LPGA Qualifying Tournament where she qualified for the LPGA Tour for 2008 and immediately turned pro. Although by turning pro she could no longer participate in collegiate golf, she completed her degree requirements while playing full-time on the LPGA Tour and graduated with honors from Florida in August 2008 with a bachelor's degree in advertising.

Gal tied for 14th in the 2007 LPGA Final Qualifying Tournament to earn full playing privileges on the LPGA in 2008; she turned professional immediately following the tournament.

In her fourth season on the LPGA Tour in 2011, Gal won her first event at the Kia Classic in late March. She finished the 72-hole event at 16-under-par, one stroke ahead of runner-up Jiyai Shin Previously her best finish had been fifth at the 2009 LPGA Corning Classic. Also in 2009, she recorded two career-low rounds of 64.

In 2016, Gal participated at the Summer Olympics in Rio de Janeiro, Brazil where she finished in the position of T25.

Gal's swing coach is Mitchell Spearman and her fitness coach is the fitness trainer of the National Golf Team Germany, Christian Marysko. Beginning in September 2016, her new caddie is Oliver Brett.

^ The Evian Championship was added as a major in 2013

The contents of this page are sourced from Wikipedia article on 09 Mar 2020. The contents are available under the CC BY-SA 4.0 license.
View Sandra Gal 's image gallery
Image Gallery