Bin Awad al Maghamsi was born in 1963 in Al Madinah Region (Al-Madina Al-Munawara) of the Kingdom of Saudi Arabia. He grew up and was educated in the Medina region. He attended King Abdul Aziz University where he graduated in Arabic language and Islamic studies. He then studied under a number of Islamic scholars such as Mohammed Attia Salem, Abu Bakr Aljazairi, Saleh Mohammed Ibn Othaymeen, and Ibn Baaz.

Al Maghamsi has been described as having close connections with King Salman. According to Foreign Policy magazine,

The new Saudi king recently served as head of the supervisory board for a Medina research center directed by Maghamsi. A year after Maghamsi’s offensive comments [on Osama bin Laden], Salman sponsored and attended a large cultural festival organized by the preacher. Maghamsi also advises two of Salman’s sons, one of whom took an adoring “selfie” with the preacher last year.

Recordings of his weekly lessons of interpretation in the Quba mosque in Medina have been released in five albums under the title Reflections verses.

Al-Rasekhoon fi Al-Elm (“Steadfast in knowledge”) is the official website of Saleh Bin Awad Al Maghamsi. According to the site, its name comes from a verse of the Quran, and aims to explicate the meanings of the Quran without neglecting the Sunna.

On March 27, 2012 on Qatar Television, Al-Maghamsi stated that although "Osama bin Laden's organization" did great harm to the Muslim nation (umma) he "has more sanctity and honor than any infidel"—infidel being defined as “Jews, Christians, Zoroastrians, apostates, and atheists”. He has been accused by the conservative business newspaper Investors Business Daily of anti-semitism.

On the controversy over whether women may be allowed to reveal their faces in public, i.e. need not wear a niqāb (Sheikh Ahmad Al-Ghamdi, had created an uproar in 2014 by saying it was allowed), Al-Maghamsi said it is "always better to be modest though he admitted that not all scholars agree that women should not reveal their faces".

Al-Maghamsi has also come out in favor of "taking care of historical mosques", stating that such a practice is not unorthodox but religious and an act of worship.

Prince of Unaizah and poet lived in the 19th century 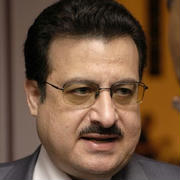 Saudi Ambassador to the UK; a member of House of Saud