Latinwo is one of Nigeria's egalitarian leaders.

From 28 August 1963 to 21 June 1966, Latinwo attended basic and advance military training in Uetersen, Western Germany, where he trained as an air force officer. In Western Germany, Latinwo attended training for his flying wings and attended the College of Navigation, West Germany, for his certificate in air navigation, which he completed in 1966. He was commissioned as a second lieutenant in 1966 upon his arrival from West Germany to Nigeria. Latinwo was adjutant, Kaduna Air force Base from 1966–68, and assistant base commander, Nigerian Air force base (NAF base) Kano, Nigeria 1970–71 and deputy base commander, NAF Base, Benin City (1971–72).

In 1972, Latinwo attended for a six-month conversion training on Ilyushin Il-28 fighter-bomber aircraft in Cairo, Egypt, and attended the Fokker F-27 Aircraft Management Course in Amsterdam, the Netherlands in 1972. He was promoted to the rank of captain in 1972.

He was appointed the director of training at the Nigerian Air force (NAF) Headquarters between 1972 and 1974. Latinwo proceeded to the Junior Command and Staff College in the United Kingdom in 1974 for further military training. In 1975, Latinwo had Type rating Training on C-130 Hercules Transport Aircraft in Atlanta, Georgia, United States.

Latinwo was appointed director of operations at the headquarters of the Nigerian Air force between 1975 and 1977. In 1976, Latinwo attended the Command and Staff College, Jaji, Nigeria. From 1977 to 1978, he was appointed base commander for Nigerian Air Force Base (NAF base) Makurdi, Nigeria.

From 1978 to 1979, Latinwo was appointed base commander for Nigerian Air Force Base (NAF base) Kaduna. He was promoted to the rank of wing commander in 1979.

In 1980, he was appointed the senior staff officer for air operations (Defence Headquarters) Lagos, Nigeria.

In 1981, Latinwo was promoted to the rank of group captain. In 1984, Group Captain Salaudeen Adebola Latinwo was nominated by the Chief of Air Staff, Air Vice-Marshal Ibrahim Mahmud Alfa, and appointed by Major-General Muhammadu Buhari, the head of state as the new Military Governor of Kwara State, a position he held until August 1985.

When Major-General Ibrahim Babangida took power in 1985, as military president of Nigeria, Latinwo was appointed as the new commander (director) of the Directorate of Administration at the Nigerian Air Force Headquarters, Lagos, Nigeria, until he was finally retired from the Nigerian Air force in March 1986.

In January 1984, the Nigerian head of state, Major-General Muhammadu Buhari, appointed Group Captain S.A. Latinwo as governor of Kwara state to carry out economic, political, and social reforms in the state.

During Major-General Buhari's official visit to Kwara State, between 9 and 12 April 1985, as the head of the Federal Military Government, Commander-In-Chief of the Armed Forces of the Federal Republic of Nigeria, Buhari said "I wish to say that the State Government under the able leadership of the Kwara State Military Governor, Group Captain Salaudeen Adebola Latinwo has done a lot to better, the lots of the masses throughout Kwara State. His actions have instilled discipline and increase peoples confidence in his Administration".

In 1999, Group Captain S.A. Latinwo (rtd) and other retired military officers became power factor in Nigeria. In 2001, when President Olusegun Obasanjo approved the composition of the boards of Federal Government Parastatals, Group Captain Salaudeen Adebola Latinwo (Rtd) was named as a board member of Federal Airports Authority of Nigeria (FAAN).

In 2008, Group Captain S.A. Latinwo (rtd) was appointed by President Umaru Yar'Adua as the chairman for Kwara State for the National Committee on Mineral Resources and Environmental Compliance (MIREMCO).

Salaudeen Adebola Latinwo was born into the famous and mega rich Aliu Onaolapo Olatinwo family of Offa, in Offa local government of Kwara State in 1943. Latinwo is one of 43 children of 10 wives of his father Aliu Olatinwo.

In 1971, Latinwo married his only wife, Mrs. Mercy Latinwo (née Aganga). He has four children. His first son is being groomed as a future governor of Kwara State.

Latinwo is the brother-in-law to the former Nigerian Minister of Finance and former Minister of Industry, Trade & Investment Olusegun Olutoyin Aganga

Group Captain S.A. Latinwo (rtd) has received several awards and decorated with many military medals. In alphabetical order they include:

The contents of this page are sourced from Wikipedia article on 24 Jul 2020. The contents are available under the CC BY-SA 4.0 license.
View Salaudeen Latinwo 's image gallery
Image Gallery 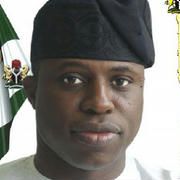