Saint Gobain (died 670), also known as Goban, was an Irish Benedictine monk and spiritual student of Saint Fursey at Burgh Castle, Norfolk, England. Born in Ireland. Little else is known of Gobain except that he would have accompanied Fursey on his travel to France, where they lived as hermits in the forest of Coucy (Aisne). Known to prefer solitude, he was murdered by non-Christian raiders while in that forest in the year 670 AD. His saint's day is observed on June 20.

Programmer from the United Kingdom 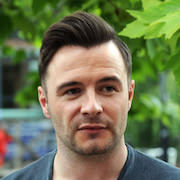