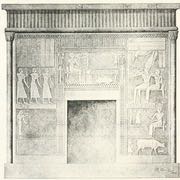 Sadeh or Sadhe was an ancient Egyptian queen consort, a lower ranking wife of Pharaoh Mentuhotep II of the 11th dynasty. Her tomb (DBXI.7) and small decorated chapel were found in her husband's Deir el-Bahari temple complex, behind the main building, along with the tombs of five other ladies, Ashayet, Henhenet, Kawit, Kemsit and Mayet. She and three other women of the six bore queenly titles, and most of them were priestesses of Hathor, so it is possible that they were buried there as part of the goddess's cult, but it is also possible that they were the daughters of nobles the king wanted to keep an eye upon.

The contents of this page are sourced from Wikipedia article on 07 Mar 2020. The contents are available under the CC BY-SA 4.0 license.
comments so far.
Comments
Trending today in

Bishop of the Coptic Orthodox Diocese of the Midlands, U.K.