Rui Gil Soares de Barros (born 24 November 1965) is a former Portuguese professional footballer.
A diminutive attacking midfielder, he played with success in Portugal (at Porto), Italy – at Juventus – and France (two clubs), later becoming an assistant manager.
Over the course of eight seasons Barros amassed Primeira Liga totals of 191 games and 43 goals, all with Porto.
At international level, Barros represented Portugal on 36 occasions between 1987 and 1996, scoring 4 goals.

Born in Paredes, Barros began his senior career with S.C. Covilhã in the second division, helping Varzim S.C. promote to the top flight in his second season as a professional.

The following campaign Barros signed with FC Porto, immediately having an impact: 12 goals in the league, which ended with the championship conquest, also being essential as the northerners began the campaign with two major achievements, the European Super Cup against AFC Ajax and the Intercontinental Cup against C.A. Peñarol; at the season's closure, the player was considered the Portuguese Footballer of the Year.

Barros joined Italian side Juventus in the summer of 1988, where he chose to wear the number 8 shirt, turning down the opportunity to wear the prestegious number 10 shirt which had previously belonged to the club's recently retired star playmaker Michel Platini, whose role he had inherited at the Turin club. He remained with the team for two seasons, scoring 19 goals in 95 appearances across all competitions, and helping the team win a Coppa Italia and UEFA Cup double in 1990. After his stint in Serie A, he signed with AS Monaco FC of France, originally for one year (eventually three); during his spell at the club he notably lost the final of the 1991–92 European Cup Winners' Cup, to SV Werder Bremen.

In the 1993 off-season Barros moved to another club in the latter nation, Olympique de Marseille, teaming up with compatriot Paulo Futre – who left Porto for Atlético Madrid precisely the year he arrived. Barros contributed to helping Marseille to a second place finish in the league, although the club was relegated following their involvement in a match-fixing scandal.

After his sole campaign with Marseille, Barros returned to Porto, where he became an important offensive element in four of the club's five consecutive league title victories between 1994 and 1999. He retired from football in June 2000, at the age of 34.

Whilst at Varzim, Barros was noticed by the Portuguese national team, and made his senior international debut on 29 March 1987, in a 2–2 draw against minnows Malta for the UEFA Euro 1988 qualifiers, in Funchal, Madeira; he played the second half of the match.

During his time with Juventus, Barros was also a leading player with the Portuguese national team, although he was unable to help his side qualify for the 1990 FIFA World Cup to be held in Italy.

He played three more games for the national team, but was overlooked for the squad picked by manager António Oliveira for Euro 1996 in England.

Barros's last international appearance came in a 0–0 draw in a 1998 World Cup qualifying match against Germany, in Lisbon, on 14 December 1996.

A dynamic and hard-working team player, Barros was a diminutive attacking midfielder who was known in particular for his speed, stamina, and technical ability, which allowed him to excel in Juventus's counter-attacking style of play under manager Dino Zoff. A tactically versatile footballer, he was capable of playing in several offensive midfield and attacking positions.

Barros stayed connected to his main club after his retirement, as a manager. After Co Adriaanse resigned in August 2006 during the preseason, he was appointed interim coach for two matches: against England's Portsmouth (2–1) and Manchester City (1–0).

Barros was also on the bench for the club's 3–0 win against Vitória de Setúbal for the domestic supercup, on 19 August 2006. Shortly afterwards Jesualdo Ferreira was appointed, and he staying as his assistant manager for the following campaigns as Porto won the league four times in a row. 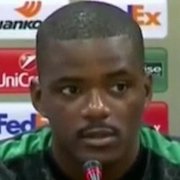