Ros Childs (born 1967) is an English-born TV journalist based in Australia with a focus on business matters. After working primarily in her native UK for the ITV Network, Childs moved to Australia and joined the Australian Broadcasting Corporation (ABC) as a newsreader.

Childs began her career as a print journalist with the Financial Times. Subsequently, she was employed at CNBC Europe as a reporter and presenter.

She was best known as the business correspondent for ITV News as well as the lunchtime and weekend news presenter. She was also one of the launch presenters on the ITV News Channel, which was known as the ITN News Channel from its launch on 1 August 2000 until September 2002. She also worked as a reporter at Sky News, on Channel 4 business documentaries and on BBC World.

After joining the ABC she was a news reporter before taking over from Chris Clarke in 2005 as the presenter of the revamped Midday Report, a national weekday news bulletin with a special focus on business, between 12:00 noon and 1:00 pm. As of 2018 she hosts the hours of live news from 12:00 pm to 3:00 pm weekdays on the ABC News channel. She has had stints as the fill-in presenter on Lateline as well as fill-in business editor on The 7.30 Report.

The contents of this page are sourced from Wikipedia article on 10 Jun 2020. The contents are available under the CC BY-SA 4.0 license.
comments so far.
Comments
Reference sources
References
http://www.abc.net.au/news/2011-05-02/about-text/46652
http://www.crikey.com.au/2010/03/17/journalism-media-couples-an-updated-crikey-list/
//www.google.com/search?&q=%22Ros+Childs%22+site:news.google.com/newspapers&source=newspapers
//scholar.google.com/scholar?q=%22Ros+Childs%22
https://www.jstor.org/action/doBasicSearch?Query=%22Ros+Childs%22&acc=on&wc=on
Trending today in 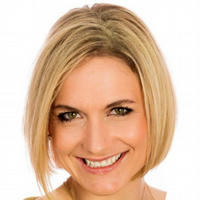