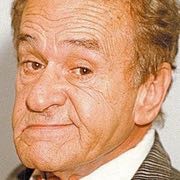 From the city of São Carlos, in the state of São Paulo, Brazil, he started as a tailor assistant and insurance agent, amongst other professions. But, during the 50s, he impressed Manoel de Nóbrega, who hired him to work as a comedian, both on TV and on the radio.

His first character was named "Pacífico", a tongue-in-the-cheek young man, that made famous the catch phrase "Ô Cride!", Portuguese for "Hey, Cride!", being "Cride" a Brazilian nickname, or misspell for the name Euclides. A big hit, it paved the way for a cinema career, where he worked on ten movies. Back to television, he brought with himself "Bronco", his main cinema character, and became a big TV hit from 1967 to 1971 with A Família Trapo ("The Trapo Family", a reference to the von Trapp family from The Sound of Music). In this show, Bronco was the brother-in-law of an Italian short-tempered man. Bronco never held a job and lived off his brother-in-law, and he was never too intimidated to view his (often provocative) opinions. His sister was a character played by Renata Fronzi. Golias' character was the most important for the show's "rhythm" and also the funniest character.

In 1979, a short-lived Brazilian version of Mork & Mindy appeared as Superbronco. It was produced by Rede Globo and starred Ronald Golias and actress Liza Vieira.

Since the early 1990s, he worked in the TV show A Praça é Nossa, playing the character Pacífico, and sometimes also "The Master" (a sage who answered questions from the people using sexual innuendo jokes on them), "Isolda" (a woman who liked to talk about her personal life to Carlos Alberto de Nóbrega, the host of the show A Praça é Nossa) and "Professor Bartolomeu Guimarães". Also was starring since 2004 a TV show of his own called Meu Cunhado, along with another famed Brazilian comedian, Moacyr Franco. When Golias died, there were 22 episodes of Meu Cunhado never shown on TV, and that probably will never be aired, because his family asked SBT to stop airing his material. He was a good friend of the Brazilian comedian Renato Aragão.

Golias died in 2005 from multiple organ failure, after being hospitalized with lung infection.

The contents of this page are sourced from Wikipedia article on 08 Mar 2020. The contents are available under the CC BY-SA 4.0 license.
View Ronald Golias 's image gallery
Image Gallery