Roberts U. Orya is the Managing Director/Chief Executive Officer of the Nigerian Export-Import Bank, NEXIM and presently the Honorary President of the Global Network of Export-Import Banks and Development Finance Institutions (G-NEXID). He came into office in August 2009 to lead the Executive Management team of the bank. With the challenges that the institution was experiencing at the time including ineffective risk management and non-adherence to corporate governance best practices, he initiated and launched a transformation agenda with the assistance of KPMG professional services.

Orya was born in Ugwe, Benue State, Nigeria, from a poor background and a father who was physically challenged. His mother seemed to have encouraged her son's desire for education; she didn't go to school but was passionate about education. As the first of eight children, Orya endured great difficulties and hardships in the pursuit of education. He later attended Benue State Polytechnic from where he got an Ordinary National Diploma after completing his studies at the Teacher's College where he obtained a National Certificate of Education (NCE) because of his desire to one day be a teacher, even though ended up in banking. Orya attended the University of Ibadan, Nigeria and graduated with an M.Sc in Banking and Finance.

His career in banking began in February 1984 when he joined the services of International Merchant Bank Plc and worked up until September 1990 when he left to join Credite Bank of Nigeria Limited briefly as a pioneer staff. He was then seconded to Prime Merchant Bank Ltd in July 1991 as Head of Operations. Orya subsequently moved to Pace Mortgage Finance Ltd in October 1992 as the General Manager/Chief Executive Officer. He thereafter joined Lobi Bank of Nigeria Ltd in January 1994 and later became the Managing Director and Executive Chairman until January 1998 when he was reassigned to Premier Commercial Bank Plc as an Executive Director. Orya's last appointment was as an Executive Director in charge of Capital Markets, Financial Advisory Services and Research & Strategy with Afribank Capital Ltd. He held the position until his appointment on 14 August 2009, as the Managing Director/Chief Executive Officer of the Nigerian Export-Import Bank.

The Federal Government reconstituted the Board of Directors of the Nigerian Export – Import Bank on 14 August 2009, including the appointment of a new Executive Management team of which is headed by Robert Orya. It was an effort at resuscitating the bank. By all financial and operational yardsticks, the bank was in dire straits. Its total loan portfolio was ₦14.6 billion out of which 72% was non-performing. Within that category, ₦10.03 billion or 69% was classified as completely lost. This ensured the depletion of the bank's shareholders fund. It took considerable efforts to lay out the state of the affairs of the bank, as a result of poor record-keeping. In spite of a bloated staff headcount, significant skill gaps were identified in the system. Before his assumption of office, NEXIM Bank at that time lacked visibility in the banking and media spaces. All the woes can be summarized as resulting from ineffective risk management framework and non-adherence to corporate governance best practices.

By December 2009, the new management of the bank under the leadership of its Managing Director, Roberts Orya, inherited huge bad debts totaling about ₦14.6 billion, about 72 per cent of which was categorized as non-performing, while over ₦10.03 billion, or 69.05 per cent, was classified lost or irrecoverable in line with prudential guidelines. NEXIM Bank under the leadership of Orya as MD/CEO seeks to help sustain Nigeria's role as a leader on the continent, particularly by harmonizing commerce in the West African region. Orya's vision (at NEXIM) is to see a significant reduction in the high transportation costs, which taken alongside reduction in the present excessive transit time, would place West African products in a vantage position to compete with goods from other markets. Under his leadership the bank now focused on sectors that have high job-creation and high export potentials in the non-oil sectors. These sectors are manufacturing, agro-processing, solid minerals and services, which are encapsulated in our MASS Agenda. Let me first highlight the key financial performances. Within 18 months of assumption of duty, the management had turned around the fortunes of the bank and ensured that it is a profit- rather than a loss-making organization.

He led the rollout of the bank's first intranet, deployed on a robust IT infrastructure. The Finacle Banking Software proposal has been forwarded to the Federal Ministry of Finance for endorsement and for appropriate recommendations to be made to the Federal Executive Council for approval. Process automation is expected to commence after deployment of the banking software. They are at a very advanced stage in the conversion of the Bank to IFRS. Also the human capital is completely transformed with the engagement of highly skilled and motivated personnel such as the Chief Risk Officer; Internal Auditor; Head, Remedial Management; Head, Strategic Planning and Head, Corporate Communication. Staff attrition rate has been virtually zero; the only staff that has left the bank in 2014 was dismissed on grounds of misconduct and non-performance.

Achievements and initiatives At NEXIM Bank

Orya led the initiative of the Nigeria Export Import (NEXIM) Bank, in conjunction with the Federation of West African Chambers of Commerce and Industry (FEWACCI), in floating the Sealink project, refreshing with the ray of hope it offers to the sub-region. The project will also cut down the capital flight from the region in terms of freight rate payment capital flight of an average of US$5 billion annually from import/export tonnages. Under his leadership the bank achieved an audited profit of ₦189.00 million in 2010 as against the loss of ₦5.46 billion incurred in 2009. For the first time ever since its inception in 1991, the bank has made a profit consecutively for four years (2010-2013) and has declared dividends for our two shareholders; the Central Bank of Nigeria (CBN) and Federal Ministry of Finance Incorporated (FMFI).

To broaden the scope of the credit offering by the bank to guarantee credits for both export and import as well as credit insurance, he led the bank entered into agreements with some international credit institutions like the Islamic Development Bank. Through his leadership the bank also generated about 1.3 billion dollars (about ₦164 billion) foreign exchange earnings for the country during the period.

Roberts Orya's leadership in NEXIM initiated the Sealink project. Roberts Orya has contributed to national and international policies including;

Orya is married with children.

The contents of this page are sourced from Wikipedia article on 12 Jul 2020. The contents are available under the CC BY-SA 4.0 license.
View Roberts Orya 's image gallery
Image Gallery

Achievements and initiatives At NEXIM Bank 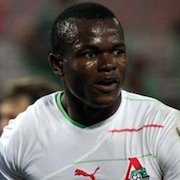