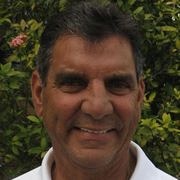 Rildo da Costa Menezes (born in Recife, January 23, 1942), also known as Rildo, is a former association footballer, one of the all-time best defender lateral for Santos F.C. with Dalmo and Geraldino.

Rildo was the last of Santos Golden Era players, which included Pelé, Pepe, Coutinho, Clodoaldo and many others. His career began in 1959 when he signed a youth contract with Botafogo. In 1961 he began his senior career with Botafogo. Two times winner in 1961 and 1962, and Brazilian Championship in 1963. In 1967, he transferred to Santos FC. Three time winner of Săo Paulo State Championship Captained the Team that won (1967, 1968, 1969). He won the World Club Championship with Santos in 1969. In 1977, he joined Pelé with the New York Cosmos of the North American Soccer League. At New York Cosmos he won the 1977 and 1978 Soccer Bowl Championship. From 1963 to 1970, he played for the Brazilian national team. In 1979, he played for the Southern California Lazers of the American Soccer League. He was selected as All League that season. In 1979, he played for the California Sunshine. On April 16, 1980, he signed with the Cleveland Cobras of the American Soccer League. After that, was head coach in California in several clubs and from 2014 until now, he is General Manager at Zamalek SC Academy, in Cairo, Egypt

In 1990, Rildo coached the California Emperors. In 1993, he coached the Los Angeles Salsa of the American Professional Soccer League. In October 1993, he resigned after the team lost the championship game. In 1995, he coached the San Fernando Valley Golden Eagles of the USISL.

Rildo is currently an assistant coach with the Marlborough High School soccer team where he oversees the junior varsity. Last season he assisted professional British Head Coach Gareth Pashley to their most successful season in the High School's history.

The contents of this page are sourced from Wikipedia article on 07 Mar 2020. The contents are available under the CC BY-SA 4.0 license.
View Rildo da Costa Menezes 's image gallery
Image Gallery