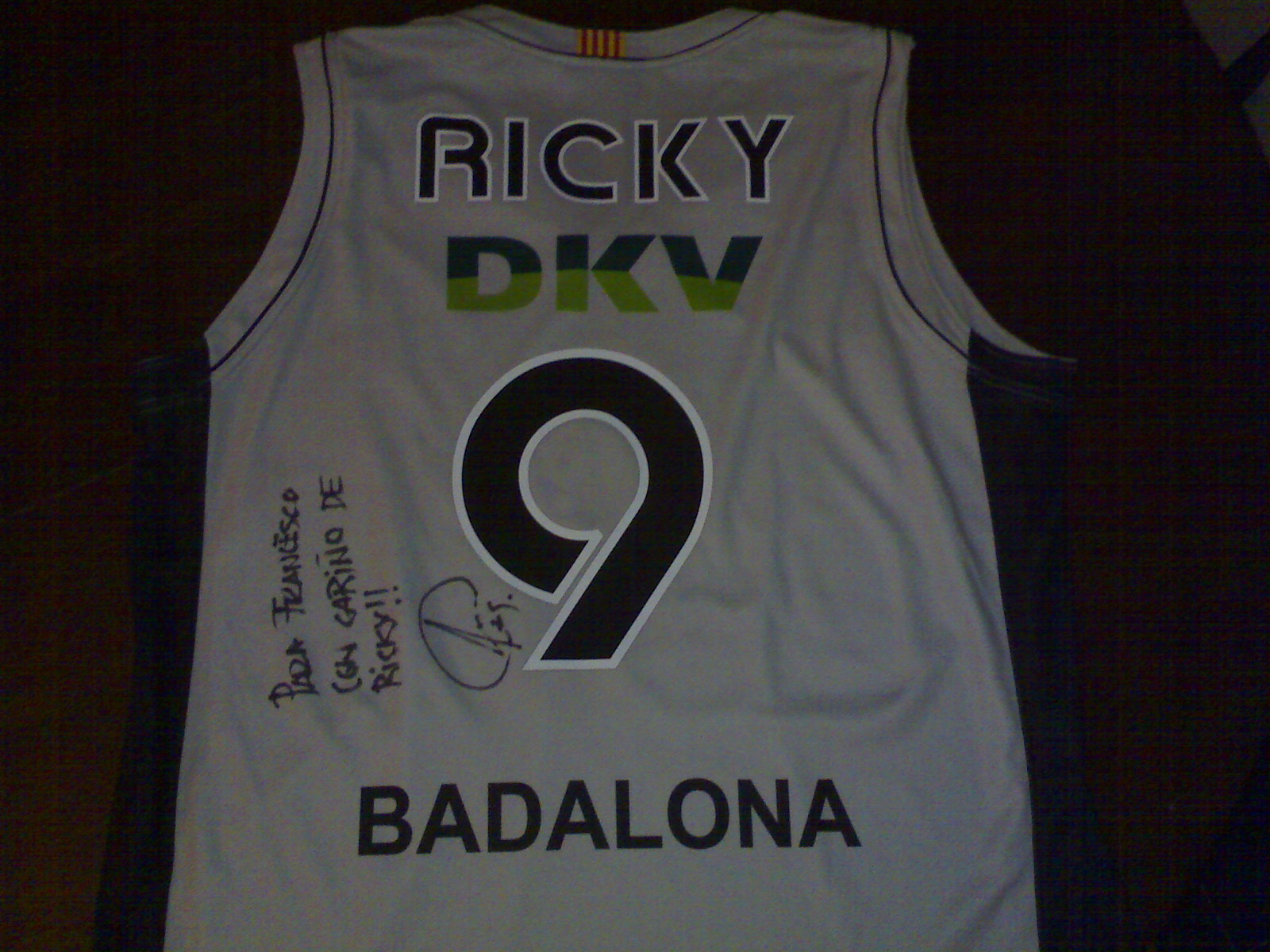 Ricard "Ricky" Rubio i Vives (born October 21, 1990) is a Spanish professional basketball player for the Minnesota Timberwolves of the National Basketball Association (NBA). Rubio became the youngest player ever to play in the Spanish ACB League on October 15, 2005, at age 14. He made his EuroLeague debut on October 24, 2006, at age 16, becoming the first player born in the 1990s to play in a EuroLeague game. On June 25, 2009, he was drafted with the fifth pick in the first round of the 2009 NBA draft by the Timberwolves, making him the first player born in the 1990s to be drafted by the NBA. The Timberwolves had an agreement in principle with his former Spanish team, DKV Joventut, to buy out his contract, but Rubio backed out of the deal. On August 31, 2009, Joventut traded the rights to Rubio to FC Barcelona, and Rubio signed a six-year contract with FC Barcelona the following day. On May 31, 2011, Rubio reached an agreement with Minnesota to join the Timberwolves for the 2011–12 NBA season. Rubio was regarded by some as the best European guard prospect ever. Rubio has been compared by some to Pete Maravich.

On June 24, 2009, the Minnesota Timberwolves acquired the 5th pick in the 2009 NBA draft, Etan Thomas, Darius Songaila and Oleksiy Pecherov from the Washington Wizards, in exchange for Randy Foye and Mike Miller. With the 5th pick, Minnesota selected Rubio, making him the first player born in the 1990s to be drafted. The Timberwolves had a total of four first round picks in the 2009 NBA draft. They used the 6th and 18th picks in the first round and chose two other point guards, Jonny Flynn from Syracuse and Ty Lawson from North Carolina, surprising many in the NBA. Lawson's draft rights were soon traded to the Denver Nuggets. The Timberwolves then used the 28th pick to select Wayne Ellington, a shooting guard from North Carolina.

The following day, Rubio's father told a Spanish media outlet that his son might return to Spain for at least one more season. Rubio did not attend an introductory press conference by the Timberwolves. Rubio had a buyout clause in his Joventut contract reported by various media outlets as ranging from $6.6 million to $8.2 million, and Timberwolves general manager David Kahn admitted that Rubio would probably have to play one more season in Spain to reduce or avoid the buyout.

On July 22, the Associated Press reported that Rubio was seeking to leave Joventut, regardless of whether he was able to come to the NBA. The report indicated that ACB powers FC Barcelona and Real Madrid were both interested in signing Rubio if he could not immediately come to the NBA. The main stumbling block to Rubio's NBA move was a clause in the league's collective bargaining agreement that prohibited a team from paying more than $500,000 toward a player's contract buyout. Barça and Real, as ACB clubs, were not subject to this rule and could pay far more toward a buyout. In another development, the St. Paul Pioneer Press reported on August 4 that Rubio's representatives had been actively seeking endorsement deals in Minnesota to help finance his buyout (the NBA buyout rules are binding on teams, but not on third parties).

However, on August 31, 2009, ESPN reported that Rubio would not come to the NBA until 2011 at the earliest. Joventut expressed a willingness to reduce the buyout, and the Timberwolves apparently had a deal to bring him to the NBA, but in the end Rubio did not feel ready to come across the Atlantic. Rubio issued the following statement:

The reason leading me to take this next step is to have a period of preparation to better take the challenge of the NBA in better conditions as a player. The Minnesota Timberwolves continue to be my first option and I wish to play with them in the near future.

Kahn believed that Rubio and his family were being pressured by the Spanish media, his national teammates, and people in his hometown to stay in Spain, adding, "It's just been a tough summer. From an 18-year-old's perspective and his family's perspective, it was very nerve-racking".

ESPN reported that his original buyout with Joventut was €5.7 million ($8.1 million) in both 2009 and 2010. Barça bought out Rubio's contract for €3.5 million ($5.0 million), and announced on September 1 that he had signed a six-year deal with the club. The contract gave him the option to go to the NBA after the 2010–11 season, with ESPN reporting that the buyout at that time would be a more manageable $1.4 million (of which the Timberwolves could pay $500,000). Despite his notability, he was carefully shielded. DKV Joventut and Rubio's parents agreed not to make him available for interviews until his 18th birthday on 21 October 2008. However, the restrictions were ended a few months early once he was selected for the Spanish national team that would play at the 2008 Olympics.

Rubio won the 2008 Mr. Europa Award, which was given out yearly by the Italian Superbasket Magazine. In 2009, his club Badalona raised the amount of money that his contract paid per year from 80,000 euros net income to 300,000 euros net income. He was named the Defensive Player of the Year for the Spanish ACB League 2008–09 season, and he also led the league in steals that season. Rubio declared himself eligible for the 2009 NBA draft on April 20, 2009. Rubio's agent is Dan Fegan. On June 1, 2011, sources reported that Rubio had "reached an agreement with Minnesota to join the Timberwolves" for the 2011–12 NBA season. Rubio arrived off a plane in Minnesota to a barrage of fans waiting to welcome him to America. On June 17, 2011, Rubio held a press conference announcing that he had signed with Minnesota.

Becoming the 10th Spanish NBA player, Rubio made his regular season debut on December 26, 2011, to a sellout crowd at the Target Center, the team's first sellout crowd since the 2007–08 season. Rubio recorded 6 points, 5 rebounds and 6 assists in 26 minutes a 4-point loss to the Oklahoma City Thunder. He was named Western Conference Rookie of the Month after the first month of the season. In February, Rubio and teammate Derrick Williams were selected to participate in the 2012 Rising Stars challenge. However, Rubio was drafted to Team Shaq, while Williams was drafted to Team Chuck. Rubio scored 22 points on February 19, 2012 in a win over the Philadelphia 76ers. In a loss to the Los Angeles Lakers on March 9, 2012, Rubio tore his ACL and his lateral collateral ligament defending Kobe Bryant. He missed the rest of the season. Rubio finished second in Rookie of the Year voting, trailing only Cleveland Cavaliers rookie Kyrie Irving. Rubio had averaged 10.6 points, 8.2 assists and 2.2 steals in 41 games.

Rubio returned from his injury on December 15, 2012, in an overtime victory over the Dallas Mavericks, playing for 19 minutes and totaling 9 assists and 8 points. He then recorded his first career triple-double with 21 points, 13 rebounds and 12 assists in a win over the San Antonio Spurs on March 12, 2013. Rubio almost recorded his second career triple-double in a loss to the Memphis Grizzlies on March 30 with 23 points, 10 rebounds and 9 assists. Then on April 13, he recorded a career-high 24 points, 10 assists, 5 rebounds and 5 steals in a win over the Phoenix Suns. Rubio finished the 2012–13 season with averages of 10.7 points, 7.3 assists and 2.4 steals per game. He also finished second in steals per game, behind Chris Paul.

On February 19, 2014, Rubio recorded a career-high 17 assists, along with 6 points, 7 rebounds and 2 steals, in a 104–91 win over the Indiana Pacers. Rubio also tied the Timberwolves' franchise record with his 17 assists. On March 19, 2014, Rubio recorded his third career triple-double with 22 points, 15 assists and 10 rebounds in a 123–122 overtime win over the Dallas Mavericks. On March 28, 2014, Rubio tied Tyrone Corbin for the Wolves season-record in steals at 175 with his one steal in a 143–107 win over the Los Angeles Lakers. Two days later, he passed that record when he recorded 2 steals against the Brooklyn Nets.

On October 31, 2014, Rubio signed a four-year, $56 million contract extension with the Timberwolves. On November 8, 2014, he was ruled out indefinitely after he severely sprained his left ankle in the November 7 game loss to the Orlando Magic. Rubio returned to action on February 2, 2015 against the Dallas Mavericks, recording 10 points and 4 assists in a 100–94 loss. On March 2, 2015, he recorded his fourth career triple-double with 18 points, 11 assists and 12 rebounds in a loss to the Los Angeles Clippers. He later underwent surgery on his ankle in April 2015.

On October 28, 2015, Rubio scored a career-high 28 points in a season opening win over the Los Angeles Lakers. He later missed four games with a sore left knee, returning to action on November 17. On December 16, he recorded a near quadruple-double with 12 assists, 10 rebounds, 9 points and 8 steals in a loss to the New York Knicks. On December 30, he tied a career high with 17 assists in a 94–80 win over the Utah Jazz. Having recorded 14 assists two nights prior in a loss to the San Antonio Spurs, Rubio became the first Wolves player with at least 14 assists in consecutive games since Terrell Brandon did so in April 1999. On March 11, 2016, Rubio's three-pointer with 0.2 seconds remaining lifted the Timberwolves to a 99–96 win over the Oklahoma City Thunder. He finished with 13 points and 12 assists for his eighth double-double of the season, as the Timberwolves snapped a 10-game losing streak against the Thunder. On March 14 against the Phoenix Suns, for the fourth time in his career, Rubio had a 17-assist effort.

In August 2006, Rubio led the rising junior Spanish national team to the FIBA Europe Under-16 Championship. During the tournament Rubio achieved two triple-doubles and a quadruple-double. In the 110–106 double overtime finale victory over Russia, Rubio scored 51 points, the first player to do so in FIBA junior tournaments since Luol Deng (in 2001), grabbed 24 rebounds, made 12 assists, and stole the ball 7 times. He also forced the first overtime with a three-point, buzzer-beating shot from mid-court. Rubio was then named the Most Valuable Player of the tournament after leading it in points, rebounds, assists and steals.

The young Spaniard was selected to take part in the Spanish National Team which participated at the 2008 Summer Olympic Games in Beijing, China. The team was composed of current and former NBA players such as Pau Gasol, José Calderón, Rudy Fernández, Marc Gasol, Raúl López, Jorge Garbajosa, and Juan Carlos Navarro, among others.

He played in the 2008 Olympics Basketball Tournament's gold medal game against the USA's "Redeem Team", and thus at 17 became the youngest basketball player to ever play in an Olympic basketball final. Rubio shared the Spanish national team's silver medal after his team suffered a 118–107 loss. The next year, he was chosen to play for Spain at the EuroBasket 2009 in Poland, where Spain won the gold medal by defeating Serbia 85–63. During the tournament, Rubio averaged 22.7 minutes, 5.9 points, 2.2 rebounds, 3.9 assists, and 1.4 steals per game.