Renato Cinquegranella (born May 15, 1949) is an Italian criminal and a member of the Camorra. Cinquegranella is on the "List of most wanted fugitives in Italy" of the ministry of the Interior.

Renato Cinquegranella was born in Naples. In the 1980s he was linked to the Nuova Famiglia and according to investigators, he was involved in the murder of Giacomo Frattini, known as 'Bambulella', a young affiliate of the Nuova Camorra Organizzata of Raffaele Cutolo. Frattini was tortured, killed and torn to pieces in January 1982, to avenge the murder in prison of a loyalist of the then Secondigliano's flamboyant boss, Aniello La Monica. Bambulella was found wrapped in a sheet in the trunk of a car with a disfigured face, while his hands and heart were found closed in two plastic bags inside the car. In May 2014 was confirmed the life sentence for Cinquegranella and other Camorristi for the crime.

In the 1980s, Cinquegranella was also accused of giving refuge in his villa in Castel Volturno to terrorists belonging to the Red Brigades.

Since 2002 Cinquegranella is wanted for mafia-type criminal association, murder, illegal possession of weapons and extortion.

From December 7, 2018, international research has been issued, and arrest for the purpose of extradition.

Since 2019, Renato Cinquegranella is the most wanted fugitive belonging to the Camorra.

The contents of this page are sourced from Wikipedia article on 23 Apr 2020. The contents are available under the CC BY-SA 4.0 license.
View Renato Cinquegranella 's image gallery
Image Gallery 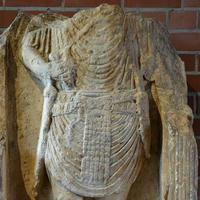 Roman soldier of the Cohors I Sagittariorum