Rekha Hande was crowned Miss India in 1983. She has also won several titles such as Spring Queen, Pond's Queen, May Queen etc. She was the Eve's Weekly First Runner-up.
Even though she gained popularity after winning the Miss India Pageant, she did not pursue the glamorous fields such as modelling and the film industry. She is married to a U.S based doctor.She currently works with Charity organisations. 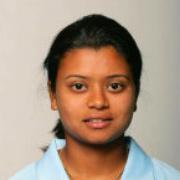