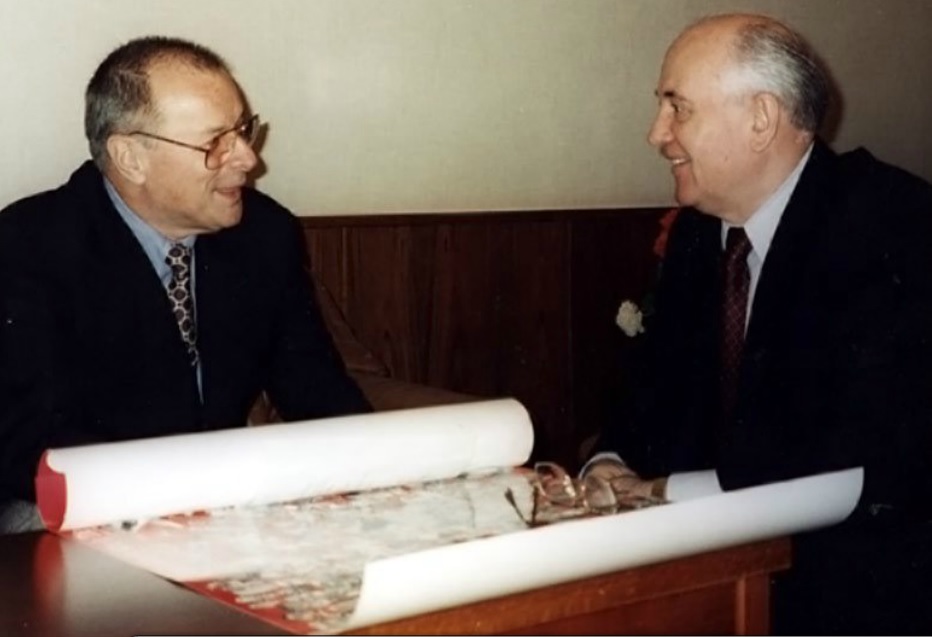 Ranan R. Lurie (born May 26, 1932) is an American Israeli political cartoonist and journalist, a senior associate at the CSIS (Center for Strategic and International Studies) since 1990, a member of the United Nation Correspondents Association, founder and Editor-in-Chief of Cartoonews, a current events educational magazine.

Ranan Lurie was born on May 26, 1932 to Joseph and Shoshanna, who traveled from Tel Aviv to Port Said, Egypt, at the invitation of the grandfather (Rabbi Isaiah Lurie) to give birth of their first born at his home. (This event gave him an advantage when he met with President Sadat (1977 and 1979) as well as with President Mubarak (1984 and 1997) for interviews and portrait-sittings). Two weeks after his birth Ranan and his parents returned to Tel Aviv. His father was sixth-generation Jerusalem-born and his mother seventh-generation.

Ranan Lurie's father, Joseph, born in 1906, was one of the first Jerusalem babies born outside the walls of the old city, in the new neighborhood of "Yemin Moshe". The grandfather Isaiah, petrified by the thought that he would be recruited into the Turkish army during the First World War, to be sent to Gallipoli, utilized his French citizenship and fled to Egypt where he became the president of the Ashkenazi Jewish community.

Lurie was a member of the Israeli underground armed organization ("Irgun") and was wounded in a battle against the British. He later served in the IDF reserves as a Major and senior company commander. He became a member of a small covert sky-diving unit of officers-only trained to operate behind enemy lines. He shared parachute training with the U.S. 101st Airborne Division in Fort Campbell, Kentucky, the 16th independent Parachute Regiment of the British Forces in Aldershot, UK, and with the French Foreign Legion's Paratroop Forces in Pau, France.

In July 1954, when Israel and Egypt were still in an official stage of war, Lurie infiltrated the flagship of an Egyptian navy flotilla anchoring in Venice, supposedly as an Australian journalist, "interviewed" the frigate's high ranking enemy officers and took photographs of their newly installed Soviet Radar. Lurie won the highest Israeli journalistic award granted "For Unprecedented bravery".

At the beginning of the Suez War the British light cruiser "HMS New Foundland", that by then was familiar with the Egyptian-Soviet radar, sunk the Egyptian "Domiat" within minutes. It however saved 69 Egyptian crew members and return them to shore.

About a week before the Six-Day War begun, Lurie had his fine-art exhibit in Montreal. He was recruited in the midst of his show to his reserve duty as a Senior Company Commander, a Major in the Fifth Brigade (Giv'aty) that was commanded by Colonel Ze'ev Shaham. Lurie's first mission was to protect Israel's "bottleneck" (the narrowest stretch of land between the sea and Jordanian Tulkarm) his original unit swelled to five hundred warriors (which now included tanks, anti-tank guns mounted on jeeps, a battery of Howitzer guns, a reserve company of Technion students as well as a company of army engineers.) After 36 hours of suffering heavy shelling he switched his force to attack-mode and concurred Tulkarm from the North. Then he received a direct order from General Uzi Narkiss, commander of The Central Command "To storm as far as possible in the direction of Nablus with the intent of reaching the Ramin Junction within ninety minutes - and make a bold sweep that will hopefully expose the Egyptian/Iraqi commandos that were trying to introduce toxic gas to the front lines." In this mission Lurie confronted the Egyptian commandos and the Arab Legion. He and his now tiny force pin-pointed the placing of the gas-equipped Egyptian commandos, and after eliminating them through fierce face-to-face battle, discovered the dreading skull & bones gas symbols on the cans available already for action. His escapades then were reported by the international media and lectured at West Point.

At the end of the combat, he gained a different kind of world attention when he refused to deport the Palestinian inhabitants of the town of Anabta to Jordan, risking a court martial that would have involved Prime Minister Levi Eshkol Lurie's friend, who after Ranan's meeting with him face-to-face instructed Minister of Defense Moshe Dayan "To return immediately all the exiled Palestinian inhabitants and rebuild any of their destroyed homes". Defense Minister Dayan obeyed.

After LIFE magazine folded in late December 1972, he was invited to publish his cartoons in Newsweek. A short time after, he was offered a full page in Newsweek International (1973–1977), and later served as the Senior Analyst and political cartoonist for The U.S. News & World Report in Washington, D.C. (1984–1986). Later, he had his own full page in Time International (1994–1997). Subsequently he had a full page in Foreign Affairs magazine (2000–2004). He was the in-house political cartoonist for The London Times, Die Welt (Germany), Asahi Shimbun (Japan) and started the first political cartoon for the Neue Zürcher Zeitung (Switzerland), which is one of the oldest newspapers in print. According to the Center for Professional Journalism Studies, over the years, he was syndicated globally to more than 1,100 publications with a daily readership of 300 million. His works were handled by the New York Times Syndicate, King Features Syndicate and Universal Press Syndicate. In 1985 Lurie started his own "Cartoonews International Syndicate.”

He is probably the only artist who has been invited simultaneously by both the Democratic Party and the Republican Party to hold a one-man show at the U.S. Senate (October 23, 1973). Senator Abraham Ribicoff unveiled Lurie's exhibition on behalf of the Democratic Party, followed by Senator Lowell Weicker, Jr., who unveiled it on behalf of the Republican Party. Vice President Gerald Ford presided over the event. The exhibit took place at the Senate Caucus Room on Capitol Hill "In Honor of Ranan Lurie" and was sponsored by the New York Times publishing house.

Lurie interviewed, drew and painted more than 250 world leaders. His drawings often include a small trademark smiling sun, sometimes drawn on the subject's necktie or other articles of clothing.

The cartoon of Marcos by Ranan Lurie, as published in Asahi Shimbun

Lurie became a naturalized citizen of the United States in 1974. Senator Lowell Weicker deliver to him personally his American passport.

In 1993, John Brewer, the president of The New York Times Syndicate set the framework for publishing a joint column by Mikhail Gorbachev, former president of the USSR, and Ranan Lurie. In the column, Gorbachev wrote his opinion about world politics (issues like the Persian Gulf War and future of Communism) and Lurie added a caricature giving a different opinion, Lurie's counterpoint. The joint column was published for some years in more than 100 newspapers worldwide, including The New York Times. Secretary-General of the United Nations, Kofi Annan, by Ranan Lurie, on the front page of "Cartoon News"

At the beginning of 1996 Lurie created "Cartoon News", an educational magazine that taught current events by introducing mainly political cartoons supported by very short texts. Lurie, the editor in chief had about 60 cartoonists from all over the world working for it. The readership reached 600,000 within a short time.

About a year later, at the recommendation of the American Ambassador to Egypt, Ned Walker, President Hosni Mubarak together with the publishers of "Al-Ahram" offered Lurie to publish his cartoons in "Al-Ahram" and print an Egyptian version of his "Cartoon News" in Arabic.

Lurie is a member of Mensa.

The United Nations/RANAN LURIE Political Cartoon Awards were created by former Secretary General Kofi Annan in 2000 and continued by Secretary General Ban Ki-moon. The award recognizes cartoons that "enhance, explain and help direct the spirit and principles of the U.N." The three first awards are worth a total of $18,000 and are distributed along with ten recognition plaques signed by the Secretary General and Ranan Lurie.

On May 28, 1997 a plaza in Seoul, South Korea was named after Ranan Lurie, who has also received the "golden key to the city". Lurie was nominated by the Republic of Cyprus for the 2002 Nobel Peace Prize, signed on March 14, 2002 by Glafcos Clerides, the President of the Republic.

He is the father of Rod Lurie, a West Point graduate who is a film director and screenwriter. His son Barak Lurie is a Stanford graduate and the Managing Partner of Lurie & Seltzer, a law firm headquartered in Los Angeles, also known for his radio show, "Lurie's Law"; His daughter Dr. Daphne Lurie is a Williams alumnus and the Directing Psychologist at the San Diego Scripps Research Institute. Danielle Lurie is a Stanford graduate and a movie director in New York. Lurie lives in Greenwich, Connecticut with his wife, Tamar Lurie, a real estate executive at Coldwell Banker, and on Central Park West in New York City. He works from his studios on the Time Warner Building.

Lurie appears twice in the Guinness Book of World Records beginning in 1999 as "the most widely syndicated political cartoonist in the world" and "as a member of the oldest traceable family in existence", which former Chief Rabbi Lau of Israeli and the Jerusalem Institute of Jewish Genealogy concluded that the Lurie family directly descends from the Royal House of the biblical King David, and can trace its genealogy back to the 10th Century, BC. The Lurie family tree includes the prophet Isaiah (8th century, BC), the Rashi (1040–1105), Hillel Hanasi "the Elder"; (30 BC-1st century AD), Felix Mendelssohn, Karl Marx, Sigmund Freud, Salvador Luria, Yehudi Menuhin, Sir Immanuel Jakobovitz, and Ranan Lurie.

He published ten political cartoon books and one novel in five languages:

In 1985, Lurie created an electronic cartoon animation technique that brought his cartoons to PBS stations and ABC network.

In 1995, Lurie co-invented an automobile braking system that has a variable light and sound warning, registered as American Patent 5481243.

Current news cartoon: Barack Obama President of the United States, November 2014
The contents of this page are sourced from Wikipedia article. The contents are available under the CC BY-SA 4.0 license.
comments so far.
Comments
From our partners
Sponsored
Trending today in