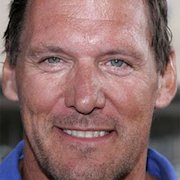 Ralf Rudolf Moeller (born 12 January 1959) is a German actor and former competitive bodybuilder. He is known for his roles of Brick Bardo in Cyborg, Kjartan in The Viking Sagas, the title character in the television show Conan the Adventurer, Hagen in Gladiator, Thorak in The Scorpion King and Ulfar in Pathfinder.

Möller began a film career in 1989 with the film Cyborg. In 1992, he appeared in Universal Soldier with Dolph Lundgren and Jean-Claude Van Damme. In 1993 he played the villain Brakus opposite Phillip Rhee and Eric Roberts in Best of the Best 2.

His two biggest mainstream film roles to date are Ridley Scott's Gladiator, and 2002's The Scorpion King. Besides these two movies, he has played the leading character in The Viking Sagas, and also played Conan the Barbarian in the TV-series Conan. The show aired in 1997–1998, and the premise was that Conan, accompanied by his three sidekicks, was chosen by the god Crom to fight and vanquish the evil Hissah Zul and to become king.

Also, in both The Bad Pack (1997) and Gladiator (2000), Möller appeared alongside fellow bodybuilder Sven-Ole Thorsen.

In 2003, he also made a cameo appearance in the music video of Maria (I Like it Loud), by Scooter, a German techno music band.

He went on to appear in El padrino (2004), sequel to The Bad Pack, once again playing Special Agent Kurt Mayers. He also played Hammacher in the 2006 film Beerfest.