Prince Moritz of Saxe-Altenburg
The basics

Moritzstraße in Altenburg is named after the Prince. 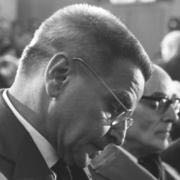