Giuseppe Baudo (born 7 June 1936), known as Pippo Baudo, is one of the most famous Italian television presenters. He is often referred to as "Superpippo". Baudo has also been the artistic director and president of Teatro Stabile di Catania.

Baudo was born in Militello in Val di Catania. While studying law at the University of Catania, he became involved in entertainment as an actor and host. He also learned to play the piano. He graduated with a degree in law, despite his interest in entertainment. At the end of the 1950s, he became a singer and pianist for Orchestra Moonlight. In 1959, for the first time, Pippo appeared on Italian TV during a "Caravella dei Successi" episode, broadcast from Palermo.

He gained success hosting several RAI programmes, as well as serving as the artistic director. Pippo signed to Mediaset but has never been able to reclaim his past success. He experienced a resurgence in his career when he hosted "Novecento" on RAI, which led to hosting the popular Sunday-afternoon show named "Domenica In" and the "Festival della canzone italiana".

In the 1970s, he helped establish and work for the Catania-based private channel "Antenna Sicilia". In 1987, he hosted "Festival" on Mediaset after a controversy with RAI president, Enrico Manca. However, years later he worked again for RAI; his show "Serata d'Onore" having been broadcast on Rai Due.

In 1997, he signed again to Mediaset, but his shows "La canzone del secolo" and "Tiramisù" had very little success. In 1999, Baudo was asked by Rai Tre to host a new prime time program, "Giorno dopo Giorno", it is now called "Novecento".

In 2007, he hosted, for his twentieth time, the Festival di Sanremo, with Michelle Hunziker; he now exceeds Mike Bongiorno, who hosted eleven times.

In 2004, Baudo and his wife, Italian soprano Katia Ricciarelli, divorced. He has two children, Alessandro, born in 1962, who is currently living in Australia, and Tiziana, born in 1970 from his first registered wife.

Inexplicably, a Google search for his name was found in the source code of the Italian company Hacking Team after its data was hacked. 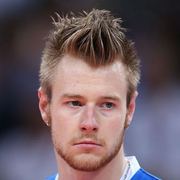