Pierre Palmade (born 23 March 1968 in Bordeaux) is a French actor and comedian.

He has done dubbing for the films, Pédale douce and Pédale dure. He is known for playing unpleasant characters in his sketches.

In 2005, he participated in Rendez-vous en terre inconnue.

In October 2008, Palmade came out as a homosexual, a theme he talks about in his latest play Le Comique (Fontaine theatre, near Pigalle, Paris).

From 27 September 2013, he will play in Le Fils du Comique with Anne-Élisabeth Blateau in Saint-Georges Theater, in Paris.

He received a Molière Award in 1993 for his show Go see me at La Cigale.

The contents of this page are sourced from Wikipedia article on 16 Apr 2020. The contents are available under the CC BY-SA 4.0 license.
View Pierre Palmade 's image gallery
Image Gallery 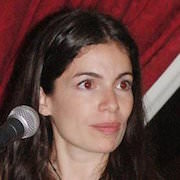