Philipp von Hörnigk (sometimes spelt Hornick or Horneck; 23 January 1640 – 23 October 1714) was a German civil servant one of the founders of Cameralism and a supporter of the economic theory of mercantilism.

Von Hörnigk was born in Frankfurt am Main and died in Passau. He wrote in a time when his country was constantly threatened by Turkish invasion. In Oesterreich über alles, wann es nur will (1684, Austria Over All, If She Only Will) he laid out one of the clearest statements of mercantile policy. He listed nine principles of national economy.

"(1) To inspect the country's soil with the greatest care, and not to leave the agricultural possibilities of a single corner or clod of earth unconsidered...

Nationalism, self-sufficiency and national power were the basic policies proposed. By 1784 15 editions of his book had been produced. 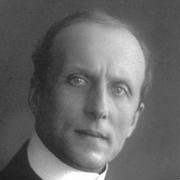