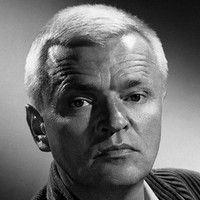 Peter van Eyck (born Götz von Eick; 16 July 1911 – 15 July 1969) was a German-born film actor. He was perhaps best known (in English-language films) for his roles in the 1960s features The Spy Who Came in from the Cold, Shalako and The Bridge at Remagen.

Van Eyck was born into an aristocratic German family from Pomerania (since 1945 part of Poland). After graduating from high school he studied music in Berlin.

While studying music in Berlin, Van Eyck purportedly had a brief liaison with Jean Ross, a cabaret singer who inspired the fictional character of Sally Bowles. Ross became pregnant with Eyck's child and, when Eyck departed Weimar-era Berlin, Ross had an abortion authorized by gay author Christopher Isherwood who falsely claimed to be her impregnator. These factual events served as the genesis for a short story by Isherwood which later became the 1937 novella Sally Bowles and was later adapted into the 1966 Cabaret musical and the 1972 film of the same name.

In 1931, after leaving Berlin, Van Eyck lived in Paris, London, Tunis, Algiers and Cuba, before settling in New York. He earned a living playing the piano in a bar, and wrote and composed for revues and cabarets. He worked for Irving Berlin as a stage manager and production assistant, and for Orson Welles Mercury Theatre company as an assistant director.

Van Eyck went to Hollywood where he worked as a truck driver. He initially found radio work with the help of Billy Wilder, who later gave him small film roles. In 1943 he took US citizenship and was drafted into the army as a commissioned officer. At the end of the war he returned to Germany as a control officer for film and remained there until 1948 as director of the film section. In 1949 he appeared in his first German film Hallo, Fräulein!

He gained international recognition with a leading role in the 1953 film Le Salaire de la peur (The Wages of Fear) directed by Henri-Georges Clouzot. He went to appear in episodes of several US TV series including The Adventures of Ellery Queen and Alfred Hitchcock Presents. In English-language films he was most often typecast as a Nazi or other unsympathetic type, while in Germany he was a popular leading man in a wider range of films, including several appearances in the Doctor Mabuse thriller series of the 1960s.

Van Eyck was married to the American actress Ruth Ford for a short time in the 1940s. With his second wife, Inge von Voris, he had two daughters, Kristina [de], also an actor, and Claudia.

He died at in 1969 in Männedorf, Switzerland of septicaemia, caused by an untreated relatively minor injury. He was 57.

The contents of this page are sourced from Wikipedia article on 08 Mar 2020. The contents are available under the CC BY-SA 4.0 license.
View Peter van Eyck 's image gallery
Image Gallery