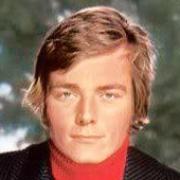 Peter Lee Lawrence born Karl Hyrenbach (February 21, 1944 in Lindau, Nazi Germany – April 20, 1974 in Rome, Italy), was a German actor and a citizen of France. He enjoyed brief fame as a prolific leading man of Spaghetti Westerns before dying at the age of 30.

He lived in Nice for several years with his mother and then in Rome (Italy) with his wife and son. He was also cast in photonovels under the name Pierre Clément.

His first notable film role was a small, uncredited, but important appearance as the brother-in-law of Lee Van Cleef in For a Few Dollars More. From then on he went on to star in 16 more Spaghetti Westerns from 1967 to 1973. He was also credited in several of these films as Arthur Grant. Some of these films were hits in Europe including Killer Caliber .32 (1967), Day of Violence (1967), Fury of Johnny Kid (1967), The Man Who Killed Billy the Kid (1967), Killer Adios (1968). He was a particularly popular actor in Cuba.

In 1971, Lawrence had a supporting role in Black Beauty. He continued acting until his death. He had 30 film credits in his nine-year career. His last credited appearance was Los Caballeros del Botón de Ancla (1974).

He met actress Cristina Galbó during the filming of Dove si spara di più in 1967, and they married two years later on 30 July 1969 until his death.

In 1972 Lawrence began suffering from headaches. Once filming finished on Los Caballeros del Botón de Ancla, he was admitted to the Foundation Jimenez Diaz Hospital in Madrid, where he was operated on by Dr. Sixto Obrador. The surgery was a success, but the biopsy report revealed it was glioblastoma. He moved to Zurich, where, under the auspices of Professor Wolfgang Horst, he began both chemo and radium treatment. On March 25, 1974, Lawrence was admitted to the Villa Stuart Clinic in Rome with severe stomach pains. He died on a Saturday, April 20, 1974, at ten past three in the morning.

The contents of this page are sourced from Wikipedia article on 08 Mar 2020. The contents are available under the CC BY-SA 4.0 license.
View Peter Lee Lawrence 's image gallery
Image Gallery