Peter Carter (born 29 April 1959) is a former Australian rules footballer who played with South Melbourne and Collingwood in the Victorian Football League (VFL).

Carter, a Brentwood recruit, never had a regular run in the South Melbourne team, with his longest season lasting four games in 1979. He joined Collingwood in 1982, but played only once at his new club.

The contents of this page are sourced from Wikipedia article on 01 Jul 2020. The contents are available under the CC BY-SA 4.0 license.
comments so far.
Comments
From our partners
Sponsored
Reference sources
References
http://afltables.com/afl/stats/players/P/Peter_Carter.html
http://www.news.google.com/newspapers?id=QC5VAAAAIBAJ&sjid=nJQDAAAAIBAJ&pg=4443,1893487
https://australianfootball.com/players/player/Peter+Carter/11128
https://australianfootball.com/players/player/peter+carter/11128
Trending today in 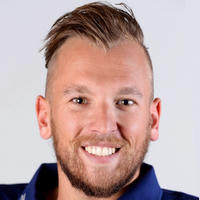