Penda Ya Ndakolo
The basics

Jafet Penda Ya Ndakolo (born March 23, 1960 at Oshigambo) is a Namibian SWAPO politician and current governor of Oshikoto Region. He served as minister of defence from 2015 to 2020. After losing his position as minister in 2020 he was appointed to his old position as governor again.

Ya Ndakolo fought for the Peoples Liberation Army of Namibia (PLAN). He studied at the Eastern and Southern Management Institute (ESAMA), and was from 1980-1989 a Specialist in Radio Communication Warfare.

He was a SWAPO District Coordinator became in 1990-1992 before 1993 was elected as Regional Councillor for Omuthiya Gwiipundi Constituency in Oshikoto Region, eventually being elevated as the Region's governor since 2004, he replaced Nico Kaiyamo as a member of the National Council the same year.

In 2014, he was awarded The Most Distinguished Order of Namibia: First Class by Namibian President Hifikepunye Pohamba.

The contents of this page are sourced from Wikipedia article on 04 Aug 2020. The contents are available under the CC BY-SA 4.0 license.
comments so far.
Comments
From our partners
Sponsored
Reference sources
References
https://www.namibiansun.com/news/goodbye2020-04-08/
http://allafrica.com/stories/201208200381.html
https://www.newera.com.na/2014/08/28/namibians-honoured-by-president/
Trending today
All Film/TV Music Politics Sports Business Science Academia 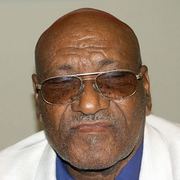