Otdelnov was born in Dzerzhinsk, a city located in Nizhny Novgorod Oblast of Russia, and devoted himself to painting since childhood. He practiced in local studio, finished elementary art school in his hometown in 1994 and entered Nizhny Novgorod Arts College. According to Otdelnov, the college was a conservative education institution that preserved traditions of socialist realism art and painting from nature. The college did not offer dormitory and Otdelnov travelled to Nizhny Novgorod and back by suburban rail, using the time for sketching. His works were displayed for the first time at Miezdunarodny Plener Malarski in Sławków, Poland in 1997. His first solo exhibition took place at Peter the Great House in Nizhny Novgorod in 1999.

He graduated from college in 1999 with diploma project devoted to First Chechen War casualties. The teachers from V. Surikov Moscow State Academy Art Institute who attended at the defense recommended Otdelnov to continue education in the institute. In the same year he moved to Moscow, entered Faculty of Painting and joined the workshop led by Pavel Nikonov, an acknowledged master of art, co-founder of 'Severe Style' of Soviet art. Nikonov's approach to teaching was focused on composition and picture plane organization, staging for drawing or painting was considered a secondary discipline.

Throughout his student years Otdelnov travelled a lot and participated in exhibitions in other countries. In 2001 he displayed his works on Arte Padova art fair in Padua, Italy followed by his solo exhibition on . That trip provided him an opportunity to visit the 49th Venice Biennale and familiarize himself with new media art, completely different from what he studied. In 2005 Otdelnov received a specialist degree with a diploma project based on Gospel stories and entered Master's degree program. He received Ministry of Culture's scholarship for young artists and joined Moscow Union of Artists and started to display his works in contemporary art galleries.

After receiving master's degree in 2007 Otdelnov started a Livejournal.com blog about art and used it as a self-education tool. In 2013—2015 he continued his education in Moscow Institute of Contemporary Art.

In 2007 curator Fedor Nikonov invited two Surikov Institute alumni Otdelnov and Egor Plotnikov to an artistic expedition to West-Siberian Metal Plant and Novokuznetsk Iron and Steel Plant constructed in the middle of XX century. Otdelnov and Plotnikov aimed to repeat the experience of Soviet artists of 1920s and 30s who portrayed the emergence of the Soviet Union as a leading industrial power. They spent two weeks sketching and taking photos of factory buildings and worked on their own series upon return to Moscow. Their artworks were exhibited in Heritage gallery in 2012 alongside with Soviet industrial art.

Contemporary art web magazine AroundArt listed Inner Degunino among 50 main projects of 2014, the MMOMA exhibition took 3rd position in readers' choice of best art displays of the year. In 2015 the project was nominated for Kandinsky Prize and entered short list in “project of the year” category. In addition, in 2014 “The Arc” painting was used as cover art for eponymous album by Nizhny Novgorod music band KernHerbst.

For “Piece of Space Traversed by Mind” exhibition in the New Wing of Gogol Museum in Moscow Otdelnov created an installation combining “glitch” made of colored LEGO bricks and paintings as three-dimensional surroundings. In participation of V-A-C foundation's “Expanding Space. Artistic Practice in the Urban Environment” programme Otdelnov created a visualization of possible public art object exploiting parallax effect.

In White sea. Black hole project presented in Nizny Novgorod Arsenal in July, 2016 Otdelnov used art, documentary and other mediums to present a research on the history of his hometown Dzerzhinsk. The project was named after two objects of accumulated ecological damage appeared from Soviet chemical enterprises — sludge pools called “White sea” and “Black hole”.

The project included paintings of ruined facilities; drawings of sludge pools based on satellite imagery; a “Wall of fame” serie of re-drawn photographies from local Soviet newspapers “Dzerzhinets”, “Workers' Voice” and “For Labour Valour”; photographies and documentary film depicting Dzerzhinsk environs. The project also included three objects — graphite rods used in chemical production, soil from the “White sea” and bricks of the ruined Dzerzhinsk house of culture, polished by wind and aggressive environment.

In cooperation with Kovcheg gallery Otdelnov displayed his works on “Personal acquaintance” exhibition within the Parallel Programme of the 3rd Moscow Biennale of Contemporary Art in 2009 and contemporary art fairs in Cologne in 2010 and 2011. Throughout the 2011 Russia-Spain Year of Culture Otdelnov's personal exhibitions took place in Madrid, Alcala de Henares and Esquivias.

In 2012 the Agency Art.Ru arranged Otdelnov's first major solo exhibition in Moscow to present his Neon Landscape project devoted to the nature of light. In 2013 his artworks were shortlisted for Strabag Artaward International. In 2013—2015 Otdelnov participated in several exhibitions organized by the Institute of Contemporary Art, including collaborative projects with Goldsmith College. On the “Perception transfers. From analog to digital” exhibition Otdelnov presented an installation that combined an artwork based upon Google Street View image with open laptop, placed over the table easel.

Pavel Otdelnov, whose artistic vocabulary is likewise located at the junction of photographic and painterly aesthetic dimensions (by his own admission, he has been influenced by the modern photographer Andreas Gursky, as well as the Russian pop artist and painter Mikhail Roginsky), <...> explores the architecture of the sites set to become monuments of the next, post-industrial era which will not leave in its wake palaces and cathedrals. His paintings feature not industrial landmarks, but landmarks of consumption and communication: Pavel Otdelnov images trading centers on the outskirts, fuel stations and highways. However, the beauty found by the artist in these facilities, which only recently began to dot our living space, is far from the pop-art ironic apologia of the flashy ephemerality of the current moment.

— Irina Kulik, in press-release for “No man's land” exhibition in Grinberg gallery 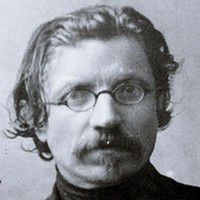 Jewish writer and playwright of Yiddish, who worked in the Ukraine and the United States