Kafeero, Paul Job (1970–2007) (Prince Paul Job Kafeero, Paulo Kafeero, the Golden Boy of Africa), the most celebrated composer and singer in the Ugandan tradition of Kadongo Kamu. At the time of his death, he was planning to celebrate 20 years of an illustrious music career. His catalogue consists of 83 songs on 21 albums. It was his 1994 hit Walumbe Zaaya, a fifteen-minute lament on death in which no word is repeated, which sent him into the Ugandan musical stratosphere. That song earned him the enduring nickname the Golden Boy of Africa from the 1994 Cairo music festival attended by thousands of African contestants, where he won a gold medal from the Institute d'Etudes Theatreales. In 2003, his hit song Dipo Naziggala, which pokes fun at the drinking habits of Ugandans, won a Pearl of Africa Music Award (PAM) for best Kadongo Kamu single. In both 2003 and 2004, he won the PAM award for best Kadongo Kamu artist/group).

Kafeero was born 12 July 1970 to Vicencio Nanganga and Phiromera Nannozi of Kirembe, Nkokonjeru in Buikwe District. This region is also known as Kyaggwe County. His mother died in 1990, just as Kafeero was beginning to achieve fame. His father died in 2011.

In 1977, Kafeero began school at Nkokonjeru Demonstration Primary School, and went on to Ngogwe Baskerville secondary school, walking the four kilometres there each day. In the same year he began school, his father left the family. Because of his mother's opposition to his interest in music, he went to stay in the nearby village of Masaba with his older sister Grace and her husband. Grace's husband intermittently paid his school fees after his father's abandonment. With no secure source of school fees, Kafeero did not finish secondary school. He earned money by making bricks, cultivating beans, selling used clothes, and tailoring. Kafeero's father gave no further support and had no contact with his son until he became famous.

As a child in the village, Kafeero was interested in music. He joined the primary school choir, but was dismissed by the choir director for being too quiet. When Kafeero learned of a neighbour in Masaba who owned a guitar, he became a regular visitor and learned to play. His mother was virulently opposed to his passion for Kadongo Kamu, afraid he would waste his life in useless pursuit. He would gather the stems and fibres from banana plants to create stringed instruments, which his mother would destroy. He eventually pooled resources with his sister's son to buy a four-stringed guitar from the neighbour who taught him to play. He would interrupt his work in bean gardens to listen to Radio Uganda's Kadongo Kamu show, featuring the stars Dan Mugula, Fred Ssebatta, Christopher Ssebaduka, Fred Masagazi, and Matia Luyima, most of whom eventually came to work with or for Kafeero.

In 1987, when he was sixteen and still in Masaba village, he founded his first musical group, the Pluto Boys. In 1988, he travelled to Kampala in hopes of joining a Kadongo Kamu group. By 1989, he was singing with Makula Guitar Singers with young stars Livingstone Kasozi and Herman Basudde. Kafeero wanted to lead his own group. He formed Kabuladda Dramactors, which he dissolved to start Kulabako Guitar Singers in 1992 with his sister Nantongo, his wife Nasuuna Mariam, Ssekate Charles, Nasanga, Bukko Brite, Namata Immaculate, Kizigo Sarah, Musange, and Kizito Misambwa. He led Kulabako Guitar Singers until his death.

He was respected by colleagues as a favourite of Ugandans who appreciate grassroots, original, message-driven music. With his deep understanding of rich and ancient Luganda, his songs maturely and innovatively address social issues. His lyrics are marked by unexpected contrast and humour, often laid over characteristically Kiganda rhythms. He constructed his narrative songs around the quotidian problems of ordinary people, weaving into his long epics the traditions and lessons of his culture.

Kafeero was unique among Kadongo Kamu musicians in that he composed, sang, played guitar and dramatised his music on stage. Keeping himself thin and smartly dressed, he successfully maintained the image of the young boy who had appeared on the musical scene at age eighteen. His melodic voice, charming stage presence and vivid costumes, combined with his meaning-laden narrative songs crafted in his beloved Luganda, endeared the star to most Ugandans in whose hearts he remains. His song Olulimi Lwange, which explained how people across the world embrace their culture, is loved throughout Buganda and Uganda. He composed this song to educate youth on how to build their future.

At his death just before his thirty-seventh birthday, in Mulago Hospital in Kampala, the out-pouring of grief from across Uganda, and from Ugandans around the world, confirmed his esteem. In the weeks after he died, stories about his life and death doubled the sales of Bukedde, Uganda's only Luganda daily newspaper; Bukedde’s sales were the highest since its founding in 1994, beating the New Vision, the leading English daily paper. Hundreds of thousands gathered in Kampala for his requiem mass at Christ the King Church and his viewing at the National Theatre. Music shops, vendors, and radio stations played his songs almost exclusively for weeks. Police and military unsuccessfully tried to control the throngs and traffic at his village funeral in Masaba. On 19 May 2007, officials from both the Ugandan national government and the Buganda Kingdom witnessed his burial, with his guitar, a few yards downhill from his first, tiny, three-roomed, cement house.

Just as Kafeero established himself as an artist dedicated to the traditions of Kadongo Kamu, his lyrics and lifestyle established him as a man grounded firmly in the family and community traditions of the Buganda Kingdom. While he spoke fluent English, he composed and sang only in Luganda, the language of the Baganda people, which is spoken predominantly in Buganda (central Uganda). His great love and respect for his language is evident in his song Olulimi Lwange. His songs reveal his social cosmology and unabashed promotion of his heritage. Like many traditional Ugandan men, Kafeero had deep and permanent roots in his village, where he insisted his children be reared, while maintaining a lively business life in the capital city Kampala. In 1987, when he was sixteen, he used the earnings from three years of odd jobs to buy a plot of land in Masaba, on which he built a thatched house. He bought this land with the currency of the government of Milton Obote because, while Yoweri Museveni overthrew the Tito Okello regime in 1986, Museveni did not replace Obote’s currency until February 1987.

Kafeero had his first child when he was eighteen. In 1989, Simon Peter Kafeero was born in his mother’s home in Mbiko in Mukono District, but when he was eight years old, he came to Masaba to live in his father’s first cement house. In 1990 his second child, Nagawa Elizabeth, was born in Masaba to Nambi Josephine. In 1994, the couple had another child, Kafeero Benedict Dube. In 1992 his third child Thomas Kafeero Schwarzeneggar was born in Nkokonjeru to Kulabako singer Nasuuna Miriam, with whom he lived while in the city. Immediately after his death, other women claimed other children as his. This number of children, unclaimed by a man fiercely proud of children and unafraid of children outside of legal marriage, is probably more a marker of his fame than of his fertility. But he does seem to have acknowledged only the children whose mothers released them to be raised by him. Well known in the city were his childless wives Grace Mukanga and Robinah Namatovu. The public remains curious about Kafeero’s marriage to American Kathryn Barrett-Gaines, immortalised in his song Omwana w'Omuzungu, written before he met her, and in their duet Baabo Bagambe. Barrett-Gaines still lives in the home they shared outside of Kampala, and looks after his sons. She has translated and published his entire body of work in a book published by Fountain Publishers in Uganda: One Little Guitar: The Words of Paul Job Kafeero. True to his traditional beliefs, he married only one wife, Nasuuna Mariam, in a traditional ceremony, and he married no wife legally. 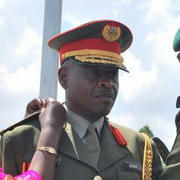