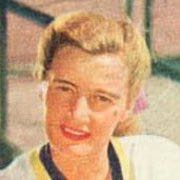 Pauline Betz Addie (née Pauline May Betz, August 6, 1919 – May 31, 2011) was an American professional tennis player. She won five Grand Slam singles titles and was the runner-up on three other occasions. Jack Kramer has called her the second best female tennis player he ever saw, behind Helen Wills Moody.

Betz attended Los Angeles High School and learned her tennis from Dick Skeen. She continued her tennis and education at Rollins College (graduating in 1943), where she was a member of Kappa Alpha Theta sorority. Betz earned an MA in economics from Columbia University.

Betz won the first of her four singles titles at the U.S. Championships in 1942, saving a match point in the semifinals against Margaret Osborne while trailing 3–5 in the final set. The following year, she won the Tri-State tournament in Cincinnati, Ohio, defeating Catherine Wolf in the final 6–0, 6–2 without losing a point in the first set, a "golden set". She won the Wimbledon singles title in 1946, the only time she entered the tournament, without losing a set. At the 1946 French Championships, held that year after Wimbledon, she lost the final in three sets to Margaret Osborne after failing to convert two match points.

Her amateur career ended in 1947 when the USLTA revoked her amateur status for exploring the possibilities of turning professional. Betz played two professional tours of matches against Sarah Palfrey Cooke (1947) and Gussie Moran (1951).

On September 2, 1946 Betz appeared on the cover of TIME magazine. Betz was inducted into the International Tennis Hall of Fame in 1965. In 1995 she was inducted in the ITA Women's Collegiate Tennis Hall of Fame. The Pauline Betz Addie Tennis Center at Cabin John Regional Park in Potomac, Maryland was renamed in her honor on May 1, 2008. Addie, Albert Ritzenberg, and Stanly Hoffberger founded the center in 1972.

In 1946, the French Championships were held after Wimbledon.

In 1949 Betz published an autobiography titled Wings on my Tennis Shoes. That same year she married Bob Addie, a sportswriter for the Washington Times-Herald and Washington Post. The couple had five children, including poet and novelist Kim Addonizio, Rusty, Gary, Jon and Rick. Her granddaughter Aya Cash is an actress. Pauline Betz Addie died in her sleep on May 31, 2011, aged 91.

The contents of this page are sourced from Wikipedia article on 08 Mar 2020. The contents are available under the CC BY-SA 4.0 license.
View Pauline Betz 's image gallery
Image Gallery