In October 2012, Sandberg was named Bergen's Best Bergenser by the news website, BT.no.

He is the son of Haakon Sandberg, also a film director. 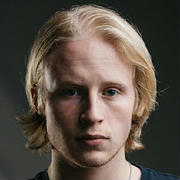