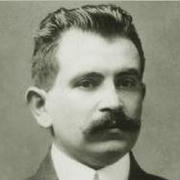 Otto Bauer (5 September 1881 – 4 July 1938) was an Austrian Social Democrat who is considered one of the leading thinkers of the left-socialist Austro-Marxist grouping. He was also an early inspiration for both the New Left movement and Eurocommunism in their attempt to find a "Third way" to democratic socialism.

Bauer was born in Vienna. Having studied at the University of Vienna, he finished his PhD in Law in 1906 and published his first book, Die Sozialdemokratie und die Nationalitätenfrage, in 1907. Although he was politically active during his studies, his gradual rise in the Social Democratic Party of Austria began after he had finished his doctoral studies. He founded Der Kampf, the theoretical journal of the party in 1907 and between 1907 and 1914 he was secretary of the party. As one of Austria's leading "left" socialists, Bauer was able to establish himself as a likely successor to Viktor Adler as party leader.

Bauer served in the Austro-Hungarian Army and was captured on the Eastern Front in the early months of the First World War. He spent three years as a prisoner of war in Russia, returning to Austria in 1917. After Viktor Adler's death in 1918, Bauer became leader of the Austrian Social Democratic Party. From November 1918 to July 1919 the Austrian Social Democrats formed a coalition government with the Christian Social Party and Otto Bauer was appointed Minister of Foreign Affairs.

Despite his Marxist socialism, he had pan-Germanic and nationalist ideas (he negotiated with the Weimar government an eventual accession of Austria into Germany by March 1919 during the German Revolution) and was disappointed when the Treaty of Versailles expressly prohibited the union of Austria with Germany.

When Engelbert Dollfuss, with the assistance of elements of the Christian Social Party and the Heimwehr, installed an authoritarian, corporatist dictatorship in 1933, the activities of the Austrian Social Democrats were severely curtailed. Following the Social Democrats' failed uprising in February, 1934, Otto Bauer was forced into exile. He continued to organize the Austrian Social Democrats' resistance, first from Brünn (Brno), Czechoslovakia, and later from Brussels, Belgium, and finally Paris. He continued his literary and theoretical work until his death.

Bauer died of heart failure in Paris on 4 July 1938, aged 56, just four months after Austria had become part of the Nazi Third Reich.

His sister, Ida Bauer, was a patient of Sigmund Freud, who published a famous case study about her using the pseudonym Dora.