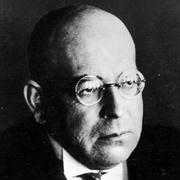 Oswald Arnold Gottfried Spengler ([ˈɔsvalt ˈʃpɛŋlɐ]; 29 May 1880 – 8 May 1936) was a German historian and philosopher of history whose interests included mathematics, science, and art. He is best known for his book The Decline of the West (Der Untergang des Abendlandes), published in 1918 and 1922, covering all of world history. Spengler's model of history postulates that any culture is a superorganism with a limited and predictable lifespan.

Spengler predicted that about the year 2000, Western civilization would enter the period of pre‑death emergency whose countering would necessitate Caesarism (extraconstitutional omnipotence of the executive branch of the central government).

Spengler is rendered as a nationalist, anti-democratic, and a prominent member of the Conservative Revolution, but he rejected National Socialism due to its excessive racialism. Instead, he saw Benito Mussolini, and entrepreneur types like Cecil Rhodes, as embryonic examples of the impending Caesars of Western culture, not withstanding his stark criticism of Mussolini's imperial adventures.

He correctly predicted important developments of his time and strongly influenced other historians, including Franz Borkenau and especially Arnold J. Toynbee.

Oswald's paternal grandfather, Theodor Spengler (1806–76), was a metallurgical inspector (Hütteninspektor) in Altenbrak. Oswald's father, Bernhard Spengler, held the position of a postal secretary (Postsekretär) and was a hard-working man with a marked dislike of intellectualism, who tried to instil the same values and attitudes in his son.

On 26 May 1799, Friedrich Wilhelm Grantzow, a tailor's apprentice in Berlin, married a Jewish woman named Bräunchen Moses (c. 1769–1849; whose parents, Abraham and Reile Moses, were both deceased by that time). Shortly before the wedding, Moses was baptized as Johanna Elisabeth Anspachin (the surname was chosen after her birthplace—Anspach). The couple had eight children (three before and five after the wedding), one of whom was Gustav Adolf Grantzow (1811–83)—a solo dancer and ballet master in Berlin, who in 1837 married Katharina Kirchner (1813–73), a nervously beautiful solo dancer from a Munich Catholic family; the second of their four daughters was Oswald Spengler's mother Pauline Grantzow. Like the Grantzows in general, Pauline was of a Bohemian disposition, and, before marrying Bernhard Spengler, accompanied her dancer sister on tours. She was the least talented member of the Grantzow family. In appearance, she was plump and a bit unseemly. Her temperament, which Oswald inherited, complemented her appearance and frail physique: she was moody, irritable, and morose.

When Oswald was ten years of age, his family moved to the university city of Halle. Here he received a classical education at the local Gymnasium (academically oriented secondary school), studying Greek, Latin, mathematics and sciences. Here, too, he developed his propensity for the arts—especially poetry, drama, and music—and came under the influence of the ideas of Goethe and Nietzsche:

I feel urged to name once more those to whom I owe practically everything: Goethe and Nietzsche. Goethe gave me method, Nietzsche the questioning faculty ...

After his father's death in 1901 Spengler attended several universities (Munich, Berlin, and Halle) as a private scholar, taking courses in a wide range of subjects. His private studies were undirected. In 1903, he failed his doctoral thesis on Heraclitus (titled Der metaphysische Grundgedanke der Heraklitischen Philosophie, The Metaphysical Fundamental Thought in Heraclitean Philosophy, and conducted under the direction of Alois Riehl) because of insufficient references, which effectively ended his chances of an academic career. He eventually received his Ph.D. from Halle on 6 April 1904. In December 1904, he set to write the secondary dissertation (Staatsexamensarbeit) necessary to qualify as a high school teacher. This became The Development of the Organ of Sight in the Higher Realms of the Animal Kingdom (Die Entwicklung des Sehorgans bei den Hauptstufen des Tierreiches). It was approved and he received his teaching certificate. In 1905 Spengler suffered a nervous breakdown.

Biographers report his life as a teacher was uneventful. He briefly served as a teacher in Saarbrücken and then in Düsseldorf. From 1908 to 1911 he worked at a grammar school (Realgymnasium) in Hamburg, where he taught science, German history, and mathematics.

In 1911, following his mother's death, he moved to Munich, where he would live until his death in 1936. He lived as a cloistered scholar, supported by his modest inheritance. Spengler survived on very limited means and was marked by loneliness. He owned no books, and took jobs as a tutor or wrote for magazines to earn additional income.

He began work on the first volume of Decline of the West intending at first to focus on Germany within Europe, but the Agadir Crisis of 1911 affected him deeply, and he widened the scope of his study:

At that time the World-War appeared to me both as imminent and also as the inevitable outward manifestation of the historical crisis, and my endeavor was to comprehend it from an examination of the spirit of the preceding centuries—not years. ... Thereafter I saw the present—the approaching World-War—in a quite other light. It was no longer a momentary constellation of casual facts due to national sentiments, personal influences, or economic tendencies endowed with an appearance of unity and necessity by some historian's scheme of political or social cause-and-effect, but the type of a historical change of phase occurring within a great historical organism of definable compass at the point preordained for it hundreds of years ago.

The book was completed in 1914, but publishing was delayed by World War I. Due to a congenital heart problem, Spengler was not called up for military service. During the war, however, his inheritance was largely useless because it was invested overseas; thus he lived in genuine poverty for this period.

When The Decline of the West was published in the summer of 1918, it was a wild success. The national humiliation of the Treaty of Versailles (1919) and later the economic depression around 1923 fueled by hyperinflation seemed to prove Spengler right. It comforted Germans because it seemingly rationalized their downfall as part of larger world-historical processes. The book met with wide success outside of Germany as well, and by 1919 had been translated into several other languages. Spengler declined a subsequent offer to become Professor of Philosophy at the University of Göttingen, saying he needed time to focus on writing.

The book was widely discussed, even by those who had not read it. Historians took umbrage at his unapologetically non-scientific approach. Novelist Thomas Mann compared reading Spengler's book to reading Schopenhauer for the first time. Academics gave it a mixed reception. Sociologist Max Weber described Spengler as a "very ingenious and learned dilettante", while philosopher Karl Popper called the thesis "pointless".

The great historian of antiquity Eduard Meyer thought highly of Spengler, although he also had some criticisms of him. Spengler's obscurity, intuitionalism, and mysticism were easy targets, especially for the positivists and neo-Kantians who rejected the possibility that there was meaning in world history. The critic and aesthete Count Harry Kessler thought him unoriginal and rather inane, especially in regard to his opinion on Nietzsche. Philosopher Ludwig Wittgenstein, however, shared Spengler's cultural pessimism. Spengler's work became an important foundation for the social cycle theory.

In late 1919, Spengler published Prussianism and Socialism (Preußentum und Sozialismus), an essay based on notes intended for the second volume of The Decline of the West in which he argues that German socialism is the correct socialism in contrast to English socialism. In his view, correct socialism has a much more "national" spirit.

A 1928 Time review of the second volume of Decline described the immense influence and controversy Spengler's ideas enjoyed during the 1920s: "When the first volume of The Decline of the West appeared in Germany a few years ago, thousands of copies were sold. Cultivated European discourse quickly became Spengler-saturated. Spenglerism spurted from the pens of countless disciples. It was imperative to read Spengler, to sympathize or revolt. It still remains so".

In the second volume, published in 1922, Spengler argued that German socialism differed from Marxism, and was in fact compatible with traditional German conservatism. In 1924, following the social-economic upheaval and inflation, Spengler entered politics in an effort to bring Reichswehr general Hans von Seeckt to power as the country's leader. The attempt failed and Spengler proved ineffective in practical politics.

In 1931, he published Man and Technics, which warned against the dangers of technology and industrialism to culture. He especially pointed to the tendency of Western technology to spread to hostile "Colored races" which would then use the weapons against the West. It was poorly received because of its anti-industrialism. This book contains the well-known Spengler quote "Optimism is cowardice".

Despite voting for Hitler over Hindenburg in 1932, Spengler found the Führer vulgar. He met Hitler in 1933 and after a lengthy discussion remained unimpressed, saying that Germany did not need a "heroic tenor [Heldentenor: one of several conventional tenor classifications] but a real hero [Held]". He quarreled publicly with Alfred Rosenberg, and his pessimism and remarks about the Führer resulted in isolation and public silence. He further rejected offers from Joseph Goebbels to give public speeches. However, Spengler did become a member of the German Academy in the course of the year.

The Hour of Decision, published in 1934, was a bestseller, but the Nazis later banned it for its critiques of National Socialism. Spengler's criticisms of liberalism were welcomed by the Nazis, but Spengler disagreed with their biological ideology and anti-Semitism. While racial mysticism played a key role in his own worldview, Spengler had always been an outspoken critic of the pseudo-scientific racial theories professed by the Nazis and many others in his time, and was not inclined to change his views upon Hitler's rise to power. Although himself a German nationalist, Spengler viewed the Nazis as too narrowly German, and not occidental enough to lead the fight against other peoples. The book also warned of a coming world war in which Western Civilization risked being destroyed, and was widely distributed abroad before eventually being banned in Germany. A Time review of The Hour of Decision noted his international popularity as a polemicist, observing that "When Oswald Spengler speaks, many a Western Worldling stops to listen". The review recommended the book for "readers who enjoy vigorous writing", who "will be glad to be rubbed the wrong way by Spengler's harsh aphorisms" and his pessimistic predictions.

In his private papers, Spengler denounced Nazi anti-Semitism in even stronger terms, writing "and how much envy of the capability of other people in view of one's lack of it lies hidden in anti-Semitism!" and that "when one would rather destroy business and scholarship than see Jews in them, one is an ideologue, i.e., a danger for the nation. Idiotic."

On 13 October 1933 Spengler became one of the 100 senators of the German Academy.

Spengler spent his final years in Munich, listening to Beethoven, reading Molière and Shakespeare, buying several thousand books, and collecting ancient Turkish, Persian and Indian weapons. He made occasional trips to the Harz mountains, and to Italy. In the spring of 1936 (shortly before his death), he prophetically remarked in a letter to Reichsleiter Hans Frank that "in ten years, a German Reich will probably no longer exist" ("da ja wohl in zehn Jahren ein Deutsches Reich nicht mehr existieren wird!"). He died of a heart attack on 8 May 1936, in Munich, three weeks before his 56th birthday and exactly nine years before the fall of the Third Reich.

Rector of the University of Munich and SS member