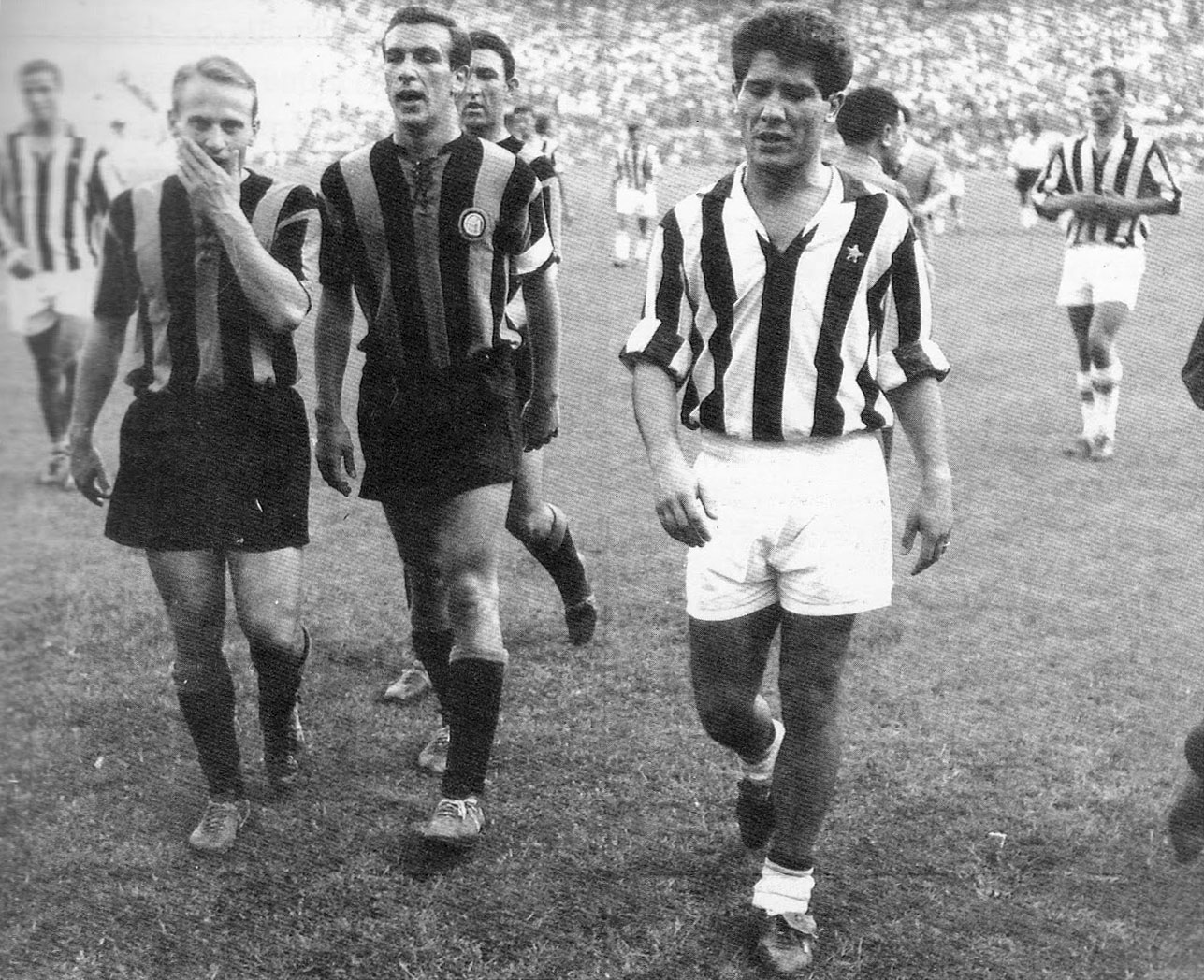 Enrique Omar Sívori (2 October 1935 – 17 February 2005) was an Italian Argentine football player and manager who played as a forward. At club level, he is known for his successful time with Italian side Juventus during the late 1950s and early 1960s, where he won three Serie A titles among other trophies; he also played for River Plate in Argentina and Napoli in Italy.

At international level, he first appeared for the Argentine national team, winning the Copa América in 1957. Later in his career, he played for the Italian national team and took part in some of the 1962 World Cup. After his retirement as player, he coached several teams in Argentina, including the national side.

Sívori was born in San Nicolás de los Arroyos, a town which falls within the Buenos Aires Province, in an Italian Argentine family. His paternal grandfather, Giulio Sivori, was an immigrant from Cavi di Lavagna, a hamlet in the province of Genoa, while his mother Carolina was of Abruzzian descent. As a youngster Sívori became heavily interested in the game of football and by the time he reached his teens he was signed up to a side from the city of Buenos Aires, River Plate. The teenage Sívori was given a chance to break through into a squad which included players like the famed forwards Ángel Labruna and Félix Loustau who established themselves in the era of La Máquina, one of the foremost formations in football history. He soon earned the nickname El Cabezón (bighead) from the fans, due to his hair and playing style. River was able to win the Argentine Primera División in 1955, the title was confirmed when River beat local archrival Boca Juniors 2–1 at La Bombonera, in Buenos Aires, with just one game remaining. The same season River won the Copa Río de La Plata by beating Nacional from Uruguay. The following season he had similar success when River won the Argentine league title on the final day of the season; beating Rosario Central 4–0, with Sívori scoring the final goal. Sívori would play his final game for River against the same team on 5 May 1957.

During the 1957–58 season, the 21-year-old Sívori was signed by Italian club Juventus after being spotted by Renato Cesarini. Juventus paid 10 million pesos (the equivalent of £91,000) for the transfer, which was a world-record transfer fee for the time. Sívori's move would prove bad for River's league fortunes, in the 18 years after 1957 they were unable to win the league in Argentina. However, they were able to complete their El Monumental stadium (previously nicknamed the horseshoe) by adding a fourth stand bearing his name, with the money from the deal.

The same season two other prominent Argentines moved to the Italian league: Antonio Valentín Angelillo (Inter) and Humberto Maschio (Bologna). The three were nicknamed The Angels with Dirty Faces by the media (an ironic reference to the then-celebrated Angels with Dirty Faces movie) on account of their typically South American colour and flair, and also The Trio of Death on account of their fearless playing style and clinical finishing.

Prior to the arrival of Sívori and Welshman John Charles, Juventus had been going through somewhat of a slump. However, the duo along with experienced Juventino Giampiero Boniperti put together a formidable force and won Serie A during the 1957–58 season. Their good form continued and Sívori won two more scudetti (1959–60 and 1960–61) as well as two Coppa Italia titles (1958–59 and 1959–60), and the Coppa delle Alpi (1963). Omar Sívori's hard work had paid off and he was named European Footballer of the Year (also known as Ballon d'or) in 1961. Sívori (right) with Juventus in 1958, near Angelillo of Inter Milan

The same year as his personal achievement however, "the Magical Trio" as they were known, had broken up with Boniperti's retirement and the following season John Charles moved back to Leeds United. Sívori stayed on with the Old Lady, notably scoring the only goal in a 1–0 victory against Real Madrid, making Juventus the first Italian side ever to win at the Santiago Bernabéu Stadium. Sívori wore the number 10 shirt and was appointed the team's captain in 1963, but did not win anymore championships or trophies with Juventus, and left after the 1964–65 season, because of a disagreement with new coach Heriberto Herrera.

With Juventus, Sívori scored 167 goals in 253 appearances in all competitions, making him the club's fifth highest goalscorer ever as of 2011. He also holds the record for most Juventus goals in a single league game; during the 9–1 victory against Inter Milan on 10 June 1961 he scored six goals, this is also the joint record for any Serie A team shared with Silvio Piola of Pro Vercelli.

In 1965 he signed with Napoli, helping them to a third-place finish in the first season at the club, they also won the Coppa delle Alpi. After two successful seasons at the club, during the 1967–68 season, Napoli's squad boasted several talents along with Sívori, such as goalkeeper Dino Zoff, and fellow strike partner José Altafini, and were considered one of the favourites to win the league title; the club took A.C. Milan all the way in the battle for the Serie A championship, but eventually finished in second place, while Sívori was ruled out for most of the season due to a knee injury and several clashes with manager Bruno Pesaola. Ironically, Sívori's last ever game for Napoli was against his former club Juventus, in which he was given a red card for kicking Erminio Favalli, and as a result, was suspended for six matches. Following his ban, Sívori decided to return to Argentina during the 1968–69 season.

At international level, Sívori represented the Argentina national football team eighteen times and registered nine goals. The Argentine side of the time had a formidable attack with Sívori, Omar Oreste Corbatta, Osvaldo Cruz, Humberto Maschio and Antonio Angelillo. They were nicknamed the "caras sucias" which literally means "dirty faces" in Spanish; in reference to the way they played the game, like fun, dirty faced, mischievous children.

Following his move to Italy in 1957, Sívori, thanks to his Italian ancestry, was able to become an Italian citizen. In April 1961 he made his debut for the Italy national football team. Along with several other foreign-born Italian players, Sívori represented Italy at the 1962 FIFA World Cup in Chile, where they suffered a first-round elimination. In total he earned nine caps and scored eight goals while playing for the Italy.

Sívori in training during his years in Turin

Encyclopædia Britannica has described Sívori's playing style as "audacious and brilliant"; a highly talented footballer, he is considered one of Italy's and Juventus's greatest ever players, as well as one of the best players of his generation. Sívori was a quick, diminutive, highly creative, and technically gifted forward, known for his pace on the ball, who utilised his acceleration, dribbling skills, flair, and feints to beat opposing defenders; these included turns, quick changes of direction, and his innovative trademark move: the nutmeg, which involved playing the ball between an opponents legs. Although he was primarily a left footed player, Sívori was an excellent finisher, who had the ability to score not only with his left, but also his right foot and, in spite of his short stature, his head; this would sometimes see him receiving kicks to the face. Despite not being particularly strong, Sívori was also known for his tenacity and bravery on the pitch.

Although he was an excellent goalscorer, especially while with Juventus, Sívori was also able to utilise his vision and passing accuracy to create chances for team-mates, working in unison with Charles and Boniperti in the club's attacking trident, and was capable of playing both as a main striker and as a second striker. Because of his playing style, skill, country of birth, hairstyle, strong mentality, and at times rebellious nature both on and off the field, Sívori is retroactively compared to a player who emerged after him; Diego Maradona, with some parts of the media dubbing him "the Maradona of the Sixties".

Sívori retired from the playing field in 1969. Although he retired to his native Argentina as a wealthy man, his love for the game meant that he decided to take up a further career as a coach; he coached River Plate, Rosario Central, Estudiantes de La Plata, Racing Club and Vélez Sarsfield. In 1970, Bobby Moore was arrested in Bogota, Colombia after a shop assistant claimed to have seen him steal a bracelet from the shop she was working in. After several days, the charges were quashed, and as Moore took a flight to Mexico, he met Sivori, who told him that the false accusation thing was frequent in Colombia.

From 1972 until 1974, Sívori took charge of the Argentine national team, he helped the team qualify for the 1974 FIFA World Cup. Sívori was the first man to call up Ubaldo Fillol for the national side, Fillol would become one of the most highly regarded keepers in Argentine history. After that he became a full-time scout for Juventus in South America.

In March 2004, Sívori was named by Pelé as one of the top 125 greatest living footballers and honoured as part of the FIFA 100. The following year in February 2005, Sívori died in his hometown of San Nicolás, at the age of 69 due to pancreatic cancer.

Sívori played the part of himself, in two Italian films.