Oburu Odinga (born 15 October 1943) is a Kenyan Nominated Senator. He is the former assistant minister for finance in the 2008 Grand Coalition government and former Member of the National Assembly.

Oburu is from well known Odinga political family, his brother Raila Odinga was second in the Presidential elections of December 2007 and March 2013. His late father Jaramogi Oginga Odinga was a prominent politician at the time of independence, serving as Kenya's first vice-president. He was an elected MP from Bondo Constituency. His sister Ruth Odinga is the Deputy Governor of Kisumu. 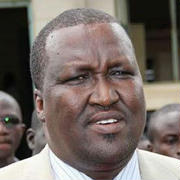