Judge, Former Speaker of the Parliament and Former Acting President of Ghana

He attended Accra Academy.Part of his earllier education was at the Presbyterian Training College at Akropong in the Eastern Region of Ghana.

He qualified as a lawyer and was registered as Raphael Nii Amaa Ollennu in the Gold Coast (now Ghana) in 1940. He later became a judge. He also published books on various legal topics and was an authority on traditional African land-tenure system. He was also actively involved with the general council of the World Alliance of Reformed Churches.

Nii Amaa Ollennu was one of the Accra representatives in the Gold Coast Legislative Assembly during the early 1950s. He once led the Ghana Congress Party, which along with the United Gold Coast Convention and the National Democratic Party, was a party of the Danquah-Busia tradition. Ollennu was thus in opposition alongside Busia and Danquah to Nkrumah's Convention People's Party.

During the second republic, Ollennu was the Speaker of the Parliament of Ghana from October 1969 to January 1972. He also became the acting president of Ghana on 7 August 1970. He was officially the chairman of the Presidential Commission. He took over from the previous military leader, Lt. Gen. Afrifa and handed over on 31 August 1970 to Edward Akufo-Addo who was elected on 31 August 1970 by an electoral college. He polled 123 votes to 35 by Edward Asafu Adjaye. This was a ceremonial presidency as executive power was held by the prime minister, Dr. Busia. Nii Amaa Ollennu was married to a sister of Dr. Busia the prime minister.

During the second republic of Ghana, Ollennu served as Speaker of the Parliament of Ghana. He died in 1986. 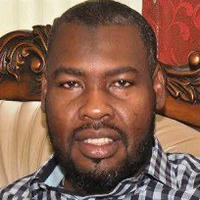