Nebsemi was an ancient Egyptian queen consort, a wife of Pharaoh Thutmose III of the 18th dynasty.

A fragment of a granite statue of hers was found in Thutmose's Theban mortuary temple. It is about 80 cm high and 30 cm wide, and portrays the queen in a sitting position. Its style is reminiscent of 12th dynasty statues, but since nothing else of that period was found in the temple, it was dated to the 18th dynasty. Nebsemi's name is not known from other sources, but judging from the statue's size she was an important person during the time when the temple was built. Her name is followed by the epithet maa kheru, "true of voice", indicating that she was already dead when the statue was made.

The contents of this page are sourced from Wikipedia article on 07 Mar 2020. The contents are available under the CC BY-SA 4.0 license.
comments so far.
Comments
From our partners
Sponsored
Reference sources
References
https://archive.org/details/annalesduservice78egyp
Trending today in 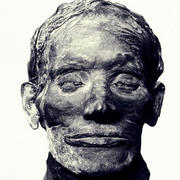