James Neal Blue (born 1935) is an American billionaire businessman, and the CEO and chairman of General Atomics based in San Diego, California.

Blue was born in 1935 in Meeker, Colorado, the son of James Elliot Blue and Virginia Neal Blue, a partner in the Denver residential real estate firm of Blue and Blue. In 1970, his mother died, and in 1986, his father died.

Blue attended Yale University. During college, he was in the Air Force ROTC.

Neal and his brother Linden Blue acquired General Atomics in 1986 from Chevron Oil for a reported $60 million. Neal serves as chairman and CEO of General Atomics, which specializes in diversified research, development and manufacturing in defense, energy and other advanced technology arenas.

Blue's brother is Linden Blue, the vice-chairman of General Atomics.

The contents of this page are sourced from Wikipedia article on 29 Jul 2020. The contents are available under the CC BY-SA 4.0 license.
View Neal Blue 's image gallery
Image Gallery 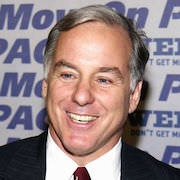