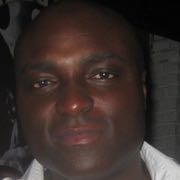 Nana Kwame Abrokwa (born 5 October 1968) is a Ghanaian born German rapper and DJ, performing under the pseudonyms Nana or Darkman. Nana is not an actual first name, but a Ghanaian title of nobility. His 1996 self-titled debut album was certified Platinum in Poland and Gold in Germany and Switzerland. The album spawned the 1997 hit single, "Lonely", which reached number-one in Germany and Switzerland, and was certified Platinum in Germany.

Nana arrived in Hamburg, Germany, with his mother and his brothers at the age of 10.

At the beginning of the 90s, his debut consisted of DJ-ing in hip-hop clubs. He also co-produced and rapped in some songs of DJ David Fascher ("Here We Go", "Make The Crowd Go Wild"), under the alias MC Africa True.

In 1995 he joined the Eurodance project Darkness as a rapper, which was produced by Bülent Aris and Toni Cottura. The song "Dreams" became a club hit, but Nana didn't feel very comfortable with the style Darkness adopted and the group separated. However, his current scene name, Darkman, originated from this time.

In 1996 Aris and Cottura founded the Black Music label Booya Music, which Nana joined as the first artist. The first single, "Darkman" reached the top 10 of Germany's official single-chart by Media Control. The following single, "Lonely", became the most successful euro-rap song, being number-one for several weeks. The album, Nana, released in 1997, is more on the mainstream, American style of rapping. It features numerous other members of the Booya Family, such as Jan van der Toorn and Alex Prince.

The second album, Father, was released in May 1998 and contains slower pieces and more personal lyrics. The songs "Too Much Heaven" and "War" were also featured on the tribute albums Love The Bee Gees and Hands on Motown.

At the end of 1999, Nana's released the single "I Wanna Fly", which flopped, due to a decrease in euro-rap's popularity and the growing importance of hip-hop played in German. Nevertheless, Nana still recorded two further albums with Booya Music, which were not released due to legal problems.

At the beginning of 2001 Nana released the German-language song Du wirst sehen, a gesture which was not appreciated by international fans. The single flopped, and the planned bilingual album Global Playa was canceled at the request of the record company.

After a long break, in the summer of 2004, Nana finally released the album All Doors In Flight No. 7, featuring Jan van der Toorn and Manuell, on his own label, Darkman Records. The album was distributed exclusively over the Internet, through Nana's website.