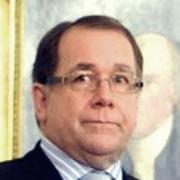 Murray Stuart McCully CNZM CF (born 19 February 1953) is a former New Zealand politician. He is a member of the National Party, and served as Minister of Foreign Affairs from 2008 to 2017.

Born in Whangarei, McCully was educated at Arapohue Primary School, Dargaville High School, the University of Auckland, and Victoria University of Wellington. He has a Bachelor of Law degree and is a qualified Barrister and Solicitor, working as a lawyer before entering politics. His former partner, Jane Clifton, works as a columnist for The New Zealand Listener and as a political journalist.

McCully first stood for Parliament in 1975 in Auckland Central, reducing Richard Prebble's majority to 289. He next stood for East Coast Bays in 1984, coming second to Gary Knapp.

But in 1987, McCully defeated Knapp, and entered Parliament as MP for East Coast Bays on Auckland's North Shore.

He became MP for the new seat of Albany at the 1996 election. In the 2002 elections he returned as MP for the reconstituted East Coast Bays seat.

Murray McCully resigned from his Tourism portfolio in April 1999 after questions were raised regarding his handling of the resignation and subsequent payout of members of the Tourism board. These questions culminated in a report of the Controller and Auditor General that deemed these payouts "unlawful," although the report accepted that all involved had proceeded on the basis of advice and "their genuine perception of what was in the best interests of New Zealand’s tourism industry."

In 2004, McCully voted against a bill to establish civil unions. In 2005, he voted for the Marriage (Gender Clarification) Amendment Bill 2005, which would have amended the Marriage Act to define marriage as only between a man and a woman.

After the National Party won the 2008 election, McCully was sworn in as a Cabinet Minister on 19 November 2008. McCully was appointed Minister of Foreign Affairs, Minister for Sport and Recreation, and Minister for the Rugby World Cup by New Zealand Prime Minister John Key.

In 2013, McCully voted against the Marriage (Definition of Marriage) Amendment Bill, a bill allowing same-sex couples to marry in New Zealand.

McCully was appointed a Companion of the New Zealand Order of Merit, for services to foreign policy, in the 2015 New Year Honours.

In November 2015, McCully was off work after surgery for removal of a growth that was found to be benign.

On 15 December 2016, McCully announced that he would not stand for parliament in 2017 (in that year's general election). Reflecting on this time as the Minister of Foreign Affairs, he has said his most challenging and rewarding work was New Zealand's role in the Pacific: "I’ve put a lot of my personal effort into ensuring that we actually live up to the expectations our neighbours have of us and the responsibilities we should carry."

In 2019, McCully was appointed an Honorary Companion of the Order of Fiji, for services to relations between Fiji and New Zealand.

The contents of this page are sourced from Wikipedia article on 08 Mar 2020. The contents are available under the CC BY-SA 4.0 license.
View Murray McCully 's image gallery
Image Gallery