Muqali (Mongolian: Мухулай; 1170–1223), also spelt Mukhali and Mukhulai, was a Mongol slave ("bo'ol", "one who is bound" in service) who became a trusted and esteemed commander under Genghis Khan. The son of Gü'ün U'a, a Jalair leader who had sworn fealty to the Mongols, he became known by his epithet "Muqali", "the Darling", earned through his committed and able service to the Great Khan and the Mongol Empire. During the invasion of Jin China, Muqali acted as Genghis Khan's second-in-command, and was promoted to Viceroy of China, and was entrusted with a great degree of autonomy once Genghis Khan departed to conquer Central Asia. Unlike many Mongol leaders who were willing to massacre to gain any advantage, Muqali usually attempted to convert foes into friends by more conciliatory means, and change the Mongol image in China. By the time of Ogedei's reign (1229-1241), he was viewed as the best of the extraordinarily talented pool of Mongol generals. Given his undefeated record despite very limited resources, he is likely one of the greatest military commanders in history.

Muqali, third son of Gü'ün U'a, was born into the 'White' clan of the Jalair tribe, who had been the hereditary serfs of the Borjigin Mongols. Originally associated with the Jurkin branch of the Borjigin, Muqali's father and uncles pledged allegiance to Genghis Khan when he defeated the Jurkin in 1197. Gü'ün U'a offered his son Muqali to Genghis as a personal slave (emčü bo'ol). Genghis rewarded the defiant Muqali for his integrity and wisdom, and afterwards was a loyal companion.

During the coronation of Genghis Khan, which seems to have been a royalist invention Muqali was given the command of the third tumen and control over the eastern mingghans. In 1211, he played a primary role in the Battle of Yehuling, the decisive battle in the first stage of the Mongol conquest of the Jurchen-led Jin dynasty in northern China.

After Genghis Khan decided to go to war with the Khwarezmid Empire, he gave control of all Mongol forces to Muqali and gave him the title of King, a largely ceremonial title. Despite Genghis Khan having most of the main Mongol forces taken away and sent to the West, Muqali was able to subdue most of northern China with his small force of around 20,000 Mongols, although some historians give figures of between 40,000 and 70,000 men to account for his foreign auxilaries.

In 1217, Muqali attacked Hebei Province as well as northern Shandong Province and northern Shaanxi Province. This was an important agricultural area, which Muqali had largely subdued by 1219. In 1220, Muqali turned his attention to the rest of Shandong Province; four towns were captured, but the hard-pressed Jin forces managed to hold on elsewhere in the province. After suffering a number of devastating defeats by Muqali in the field, the Jin learned that they could only hope to resist him by holding their cities and outlasting Muqali's staying power.

Muqali's last campaign began in 1222. He crossed the Wei River and attacked south, capturing towns that had already been plundered by a previous Mongol general, Samuqa. Meanwhile, the Jin forces launched a counter-attack in Shanxi Province. Muqali swiftly raced to the area; the Jin forces fled without giving battle. Besieging another town, Muqali became seriously ill and died shortly thereafter in 1223. On his deathbed, Muqali declared with pride that he had never been defeated.

After his death, Genghis Khan gave command to Muqali's son, Bol. In seven years of campaigning in northern China, he had reduced the Jin dynasty's territories to only Henan Province. He had proven himself to be an excellent general who was indefeatigable in his efforts to serve Genghis Khan. His extraordinary tenure was demonstrated by the inefficacy of other Mongol generals who failed to make any headway in China after his death. By the time of Ogedei's ascension in 1229, the Mongol detachments in China had suffered numerous setbacks, which led to a mini-revival of Jin fortunes until Subutai and Tolui were dispatched with the main Mongol army in 1232.

After his death, descendants of Mukhali served the Great Khan of the Mongols, especially those of the Toluid lineage. A few of his descendants, such as Antong and Baiju, later became prominent officials in the Confucian fashion of the Yuan dynasty founded by Genghis Khan's grandson, Kublai Khan.

Retainers of the Toluid Hulagu participated in the conquest of Persia, then called Mollai, and later founded the Jalayirid Dynasty which ruled from Baghdad after the collapse of the Hulaguid Ilkhanate.

A statue of Muqali, together with Bo'orchu, flanks the statue of Genghis Khan in Chinggis Square in Ulaanbaatar.

The contents of this page are sourced from Wikipedia article. The contents are available under the CC BY-SA 4.0 license.
View Muqali 's image gallery
Image Gallery 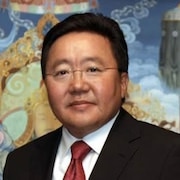 Last Khagan of the Mongol Empire 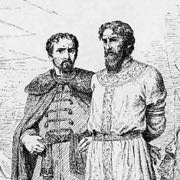 Khan of the Golden Horde