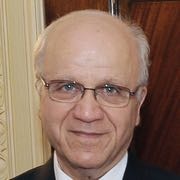 Mourad Medelci (Arabic: مراد مدلسي‎; 30 April 1943 – 28 January 2019) was an Algerian politician who served in the government of Algeria as Minister of Foreign Affairs from 2007 to 2013. He was President of the Constitutional Council of Algeria from 2013 until his death in 2019.

Born in Tlemcen on 30 April 1943, Medelci studied economics at the University of Algiers, receiving his bachelor's degree in 1966 and master's degree in 1968. From 1970 to 1980 he worked in the private sector before entering public service as Secretary-General of the Ministry of Trade in 1980. He was married with five children.

Medelci was very unwell in January 2019, he was hospitalised in Paris before being brought back to Algiers in the last week of January. By 27 January, he was incapable of carrying out his role of president of the Constitutional Council just as it was preparing to oversee the 2019 Algerian presidential election. Medelci died at approximately 1:30am on 28 January in Algiers. He was buried the same day in Ben Aknoun cemetery. The constitutional council, led by the vice-president will meet to discuss the situation.

The contents of this page are sourced from Wikipedia article on 08 Mar 2020. The contents are available under the CC BY-SA 4.0 license.
View Mourad Medelci 's image gallery
Image Gallery