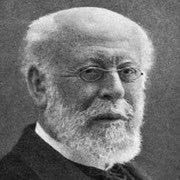 Cantor was born at Mannheim. He came from a Sephardi Jewish family that had emigrated to the Netherlands from Portugal, another branch of which had established itself in Russia. In his early youth, Moritz Cantor was not strong enough to go to school, and his parents decided to educate him at home. Later, however, he was admitted to an advanced class of the Gymnasium in Mannheim. From there he went to the University of Heidelberg in 1848, and soon after to the University of Göttingen, where he studied under Gauss and Weber, and where Stern awakened in him a strong interest in historical research.

After obtaining his Ph.D. at the University of Heidelberg in 1851, he went to Berlin, where he eagerly followed the lectures of Peter Gustav Lejeune Dirichlet; and upon his return to Heidelberg in 1853, he was appointed privat-docent at the university. In 1863, he was promoted to the position of assistant professor, and in 1877 he became honorary professor.

Cantor's inaugural dissertation, "Über ein weniger gebräuchliches Coordinaten-System" (1851), gave no indication that the history of exact sciences would soon be enriched by a master work by him. His first important work was "Über die Einführung unserer gegenwärtigen Ziffern in Europa", which he wrote for the Zeitschrift für Mathematik und Physik, 1856, vol. i.

Many historians credit him for founding a new discipline in a field that had hitherto lacked the sound, conscientious, and critical methods of other fields of history.

In 1900 Moritz Cantor received the honor of giving a plenary address at the International Congress of Mathematicians in Paris (Sur l'historiographie des mathématiques).