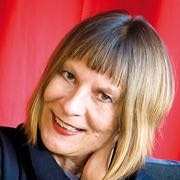 Monika Treut (born April 6, 1954, in Mönchengladbach, North Rhine-Westphalia, Germany) is a German lesbian filmmaker. She attended high school at an all-girls state school. She studied German and Political Science at university. She wrote her PhD thesis about The Cruel Woman: Female Images in the Writing of Marquis de Sade and Leopold von Sacher-Masoch. After passing the state examination she graduated in 1978.

During her studies at university in the mid-1970s she began working with video. She worked as a media associate in Marburg, Frankfurt, and Berlin. In 1984, Treut earned her doctorate degree in philology from the University of Marburg. That same year she founded Hyena Filmproduktion together with Elfi Mikesch, and began producing, writing, and directing independent feature films. The following year Treut made her feature film debut with Seduction: The Cruel Woman, a film that explored sadomasochistic sex practices. Treut also spent time in America during the 1980s. Traveling and working in San Francisco and New York City, Treut met and worked with Annie Sprinkle and Werner Schroeter, while also producing some of her own films. These relationships led to the films Annie (documentary short), My Father is Coming and Encounter with Werner Schroeter (documentary short).

Famous for her queer films, Treut also makes documentaries. Her films have explored many interests around the world. The subject matter varies from film to film; whether queer-themed, or about one woman's efforts to help street kids in Rio de Janeiro, or about the culinary arts of Taiwan—her documentaries find interesting, real people to focus on.

Throughout her film career Treut has been involved in several aspects of filmmaking, including acting, directing, producing, writing, filming, and editing. Her film catalogue includes over 20 films, both in her native language German and in English.

Treut has been recognized on several occasions for her excellence in filmmaking, having taken home the following awards for her work:

Treut has been involved with "PROJETO UERE", an organization founded by Yvonne Bezzerra de Mello, the subject of Treut's film Warrior of Light. "PROJETO UERE" is a program created to help the street kids of Rio de Janeiro.

Treut's most recent film, Of Girls and Horses, focuses on the relationship that develops between 16-year-old high school dropout Alex and upper-class Kathy at a horse farm. Alex works at the horse farm for a school internship, supervised by lesbian riding instructor Nina. In an interview from the website Afterellen, conducted by Marcie Bianco, Treut reveals her intentions for the movie and the message she hopes it will send. She says, "In this film, I just wanted to picture [the insecurities that queer teenagers face] and find a way of coming out of it...".

In The Raw and the Cooked, Treut travels around Taiwan, exploring its rich culinary tradtitions and their relationship to the island's unique culture. The film also seeks out people who attempt to create a sustainable food system through innovative projects. The film had its world premiere at the Culinary Film section of the Berlin International Film Festival on February 12, 2012.

In a book written by Ya-chen Chen, an author known for her work regarding Chinese Feminism, there is a section of the book that mentions Monika Treut’s film, Ghosted. Chen praises Treut for her ability to, “…exceed not only the essentialist restriction of physiology but also the corporeality that ghosts lose after deaths…” Chen also says that Treut did a good job at portraying a variety of different Chinese Religions and their beliefs regarding ghosts.

Since 1990, Treut has been teaching, lecturing and curating retrospectives of her work at colleges across the United States (Vasser, Hollins, Dartmouth), at art institutes (SFAI) and at universities (IU Bloomington, UI Chicago, UC San Diego and Cornell U ).

The contents of this page are sourced from Wikipedia article on 08 Mar 2020. The contents are available under the CC BY-SA 4.0 license.
View Monika Treut 's image gallery
Image Gallery