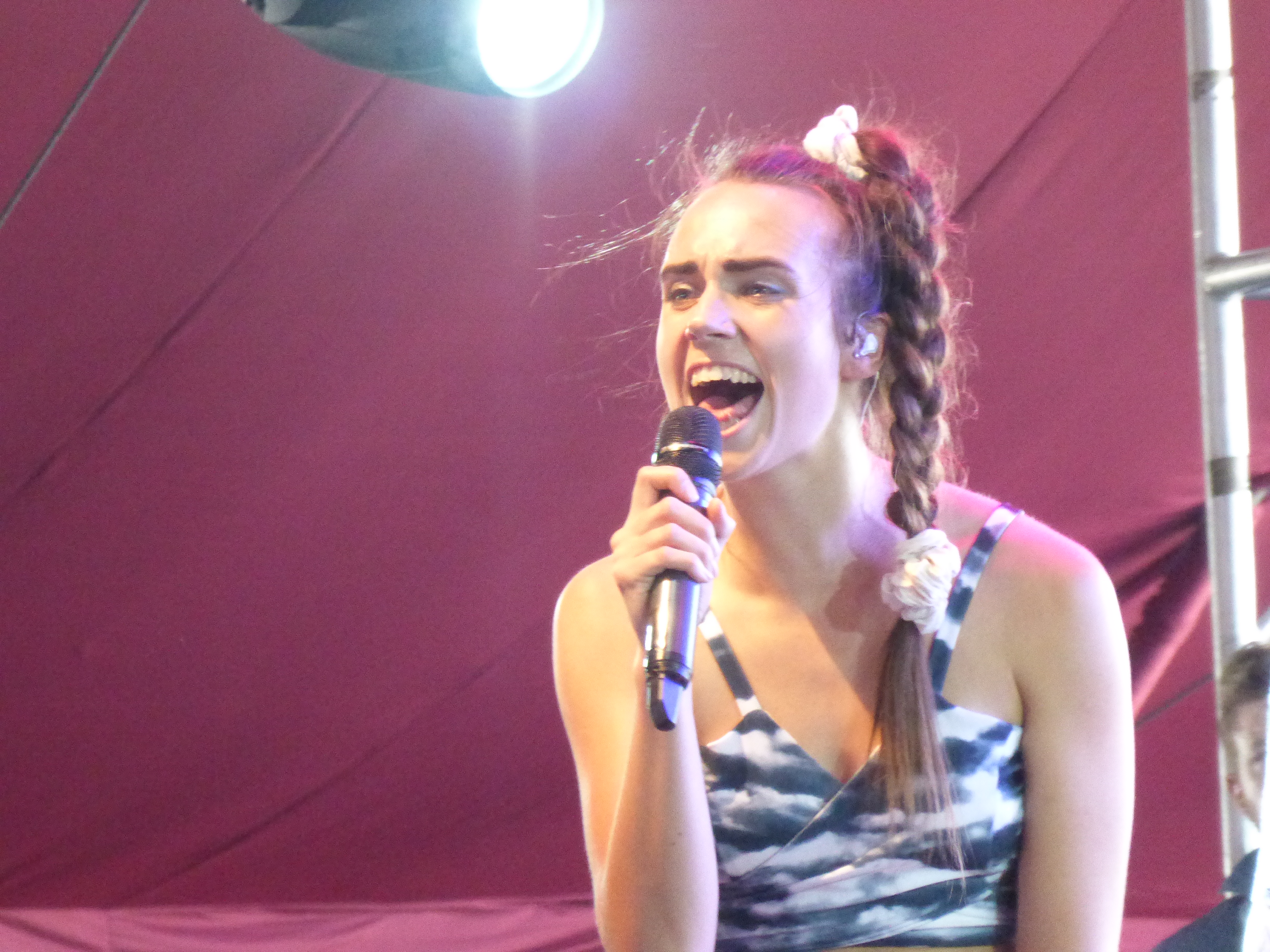 Karen Marie Aagaard Ørsted Andersen (born 13 August 1988), known professionally as MØ (English: /muː/; Danish: [mœ]; pronunciation audio here), is a Danish singer and songwriter, signed to Sony Music Entertainment. Born in Ubberud, MØ has been compared to electropop artists such as Grimes and Twin Shadow. Besides being an acronym for her middle and last name initials, the word mø means "maiden" or "virgin" in Danish. Her debut studio album, No Mythologies to Follow, was released in March 2014.
MØ collaborated with Australian rapper Iggy Azalea on the 2014 single "Beg for It", which peaked at number 27 on the US Billboard Hot 100, earning MØ her first entry on the chart. The following year, MØ was featured on Major Lazer and DJ Snake's single "Lean On", which peaked highly on international charts, including number one in Australia, number two in the United Kingdom and number four in the United States.

MØ was born in Ubberud near Odense, and grew up in Ejlstrup on the island of Funen, Denmark. Her father, Frans Ørsted, is a psychologist and her mother, Mette Ørsted, is a teacher. She has an older brother, Kaspar, who is a doctor.

In 2006, MØ released a side project titled ("The Edmunds") which included tracks such as ("Garbage King") and ("Polly Get Your Gun"). MØ also released several other side projects during 2008–10 including titles such as ("A Piece of Music to F*ck to") and ("The Rarities") The side-projects included songs that have been previously taken down due to an unknown reason, but has been re-released by a fan on YouTube.

MØ and her friend Josefine Struckmann Pedersen formed duo MOR in 2007, and released two EPs, Fisse I Dit Fjæs ("Pussy in Your Face") and Vanvidstimer ("Madness Hours"), in 2009 and 2011, respectively. MOR disbanded on 7 September 2012.

In 2012, MØ began creating a cappella pop songs and began collaborating with producer Ronni Vindahl. On 14 January 2013, MØ released her debut single, "Glass". On 15 March 2013, she released "Pilgrim" with the B-side "Maiden". "Pilgrim" was recognised as P3s Uundgåelige (P3 Unavoidable), a label given to rising artists by Danish radio station DR P3, as it peaked at number eleven on the Danish Singles Chart. On 27 March 2013, she performed live on television for the first time at the Danish P3 Guld Awards.

MØ's debut studio album, No Mythologies to Follow, was released on 7 March 2014. On the review aggregate site Metacritic, the album has a Metascore of an 77 out of 100 indicating "generally favorable" reviews. Music blog Pretty Much Amazing called the album "complex and euphoric", while The Guardian noted that "what [MØ] lacks in originality, she makes up for with warlike ardour".

MØ began touring in Europe and the United States in support of the album, ending in June. On 2 June 2014, she made her US television debut on Jimmy Kimmel Live!, where she performed the songs "Don't Wanna Dance" and "Pilgrim". "Walk This Way" was released on 16 June 2014 as a single from No Mythologies to Follow. On 23 June, MØ announced additional United States and Canadian tour dates beginning in September. In November 2014, she won four awards at the Danish Music Awards: Danish Album of the Year, Danish Solo Artist of the Year, Danish Breakthrough Artist of the Year and Danish Music Video of the Year.

In 2014, MØ was featured on Australian rapper Iggy Azalea's song "Beg for It", which was released as the lead single from Azalea's reissue album, Reclassified. Azalea and MØ performed the song for the first time on Saturday Night Live on 25 October.

MØ also co-wrote the song "All My Love" by Major Lazer, featuring vocals from American singer and songwriter Ariana Grande. MØ co-wrote and provided vocals for another Major Lazer song, "Lean On" with DJ Snake, which was released in March 2015. The single topped the charts in MØ's native Denmark, Australia, Finland, Ireland, the Netherlands and New Zealand, while reaching the top five in several countries, including France, Germany, Sweden, the United Kingdom and the United States.

On 1 October 2015, it was announced that the first single from MØ's upcoming second studio album, "Kamikaze", produced by Diplo, would be released on 15 October 2015. On 14 October, the single made its world premiere on a BBC Radio 1 segment hosted by Annie Mac before the studio version was released the following day. "Kamikaze" charted in Denmark, the United Kingdom, Australia and Belgium. On 13 May 2016, "Final Song", the second single from MØ's second album, was released and also made its world premiere on the same radio segment hosted by Mac. The song was co-written with Swedish singer and songwriter Noonie Bao and English singer and songwriter MNEK. It became MØ's first top 40 single as a lead artist in the United Kingdom, with the song reaching number 15 on the UK Singles Chart. Additionally, the song reached the top 40 in more than 10 countries worldwide.

On 22 July 2016, Major Lazer released the single "Cold Water" which features Canadian singer Justin Bieber and MØ, marking the fourth time she has worked with Major Lazer. In the United States, "Cold Water" debuted at number two on the Billboard Hot 100, becoming MØ's second top 10 and her third top 40 single, It is also her highest-charting single in the United States. MØ is the highest-charting Danish act along with Jørgen Ingmann ("Apache") and Lukas Graham ("7 Years"), who all reached number two on the Billboard Hot 100. In the United Kingdom, "Cold Water" debuted at number one on the UK Singles Chart. The song became MØ's first number-one single, and she is only the fourth Danish act to reach number one in the UK. Additionally, it is the first time two Danish acts have reached number one in the same year (with the other being Lukas Graham's "7 Years").

On 17 September 2016, MØ announced the release of her new track titled "Drum" on Twitter. It has previously made special appearances in previous concerts and shows. The song was produced by American producer Bloodpop also co-written by English singer and songwriter Charli XCX alongside Noonie Bao. On 7 October 2016, the song's official audio was released.

On 6 January 2017, English electronic duo Snakehips premiered their new track "Don't Leave" which features vocals from MØ. The official lyric video was also released the same day, it has been said that it will be featured in Snakehips upcoming debut album.

MØ's music has been described as "electro music with guts". NME compared her work as a cross between Siouxsie Sioux and Janet Jackson.