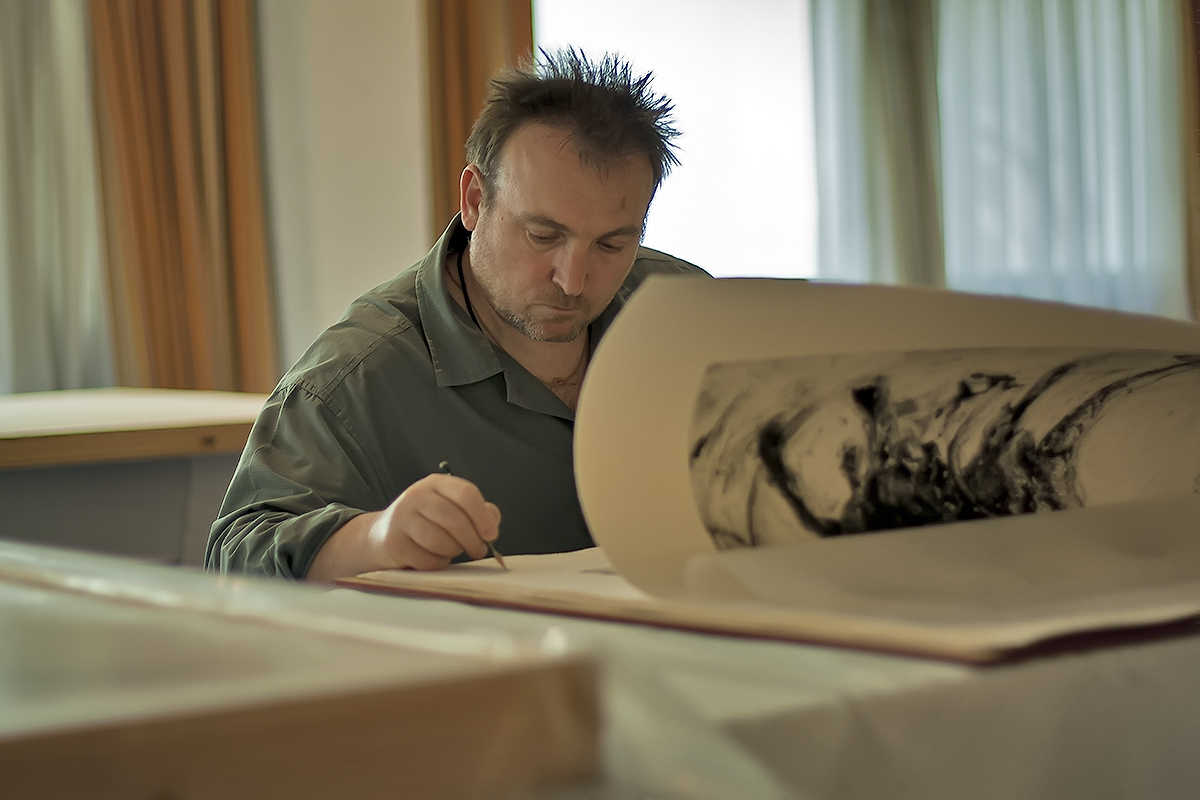 Miquel Barceló (born 1957) is a Spanish painter from Felanitx, Majorca.

After having studied at the Arts and Crafts School of Palma for two years, he enrolled at the Fine Arts School of Barcelona in 1974. A year later he returned to Mallorca to participate in the happenings and actions of protest of the group "Taller Llunàtic", a conceptual avantgarde group. All of a sudden set free by the changed political circumstances, they felt an impulse to reexperience all they had gleaned from demonstrations of vanguardism both in European capitals and the United States. He also took part in the creation of their artist periodical Neon de Suro (21 issues from 1957–1982), another reaction to the common belief in the 1970s, that painting was dead.

A year after his return to Majorca he had his first one-man show at the Palma Museum. Initially the Avant-garde, Art Brut and American abstract Expressionism (e.g. Pollock had a big impact on him) influenced Barceló's work, on the other hand he was always particularly interested in the Baroque paintings of Diego Velázquez, Tintoretto and Rembrandt. Dubuffet, who saw himself as a true anarchist, inspired Barceló in adopting an experimental attitude. Soon he found his own way of expression by simplifying and reducing different "-isms" of the last decades and reformulating themes and technical challenges, but he has never abandoned the sanctified rules of the conventional painting such as the "chiaroscuro" for example. He believes strongly in his continuation of a grand tradition.

Throughout the 1980s, he travelled extensively across Europe, the United States and West Africa – always returning to Paris which became a second home and where he set up a second studio. Extremely fascinated by Mali, a third studio was installed in Segou. The time Barceló spent in different countries, his nomadism or peripatetic habits essentially influenced and inspired his work, most strongly the impressions of West Africa: the power of its light, the scorching sun, the rocky landscape, the sea and rivers – visual experiences that may have reminded him of his native Majorca.

Within the impressions and influences of various cultures and multifaceted landscapes, his treatment of some of the great themes of classical painting, like landscape, still life, the artist's studio or the portrait, and technical challenges, like perspective, colour and the treatment of light and the composition, is recurrent. His painting from memory includes autobiographical quotations in a boundless exploration of new forms of expression, in which he extensively experiments with a wide range of materials, textures, light, colour and pictorial procedures, with the mutation of the elements, liquefaction of objects and their transitoriness by fading away, metamorphisis and death. He therefore experiments with anorganic as well as with organic material or elements. Alongside the exploration of new motifs, an always recurring motif – suggesting that Majorca is always with him – is the sea which he approached from changing perspectives. His work on paper, paintings, modelled work, sculptures and ceramics seem to be interconnected in a way that transcends time and space, even though they are always linked to certain spatial and temporal coordinates. An unconscious link between his preoccupations, fantasies and disclosures give his art a narrative and aesthetical unity and coherence.

His participation at the "Documenta 7", Kassel, Germany, in 1982 gained him international recognition. From the mid eighties on, Barceló's work (paintings, drawings, sculptures and ceramics) has been subject of numerous shows worldwide in renowned galleries (Galerie Bruno Bischofberger, Leo Castelli) important museums and at other cultural sites.

In 2004 Barceló's watercolours, illustrating Dante's Divine Comedy, were shown at the Louvre Museum in Paris. Thus, he became the youngest artist ever shown in this museum. A present activity is an important project for the Majorca Cathedral's Chapel Sant Pere, a homage to his native homeland. He is using ceramics not as objects (like the series of ritual icons which he did in 1998 for the church Santa Eulàlia, Church of the Catalans, in Palermo, Sicily) but for the formation of a crafted mural of approximately 300m2. Barceló covered the entire chapel with terracotta, creating a kind of second skin and decorated it with images related to the sixth chapter of the Gospel of St. John, the miracle of the multiplication of bread and fish, a theme chosen because the chapel is dedicated to the holy sacrament of the Last Supper. Beyond that, Barceló's creativity was also in demand for other opportunities; in 1990 he designed costumes and the stage for Manuel De Falla's opera "Tréteaux de Maître Pierre" at the Opéra-Comique in Paris and at the Festival of Avignon 2006 he is part of a performance with choreographer Joseph Nadj.

18 November 2008 the Spanish government officially presented Miquel Barceló’s latest immense work of art in the UN’s Palace of Nations in Geneva. The work of art is a massive sculptural installation located on the domed ceiling of the building’s newly created Chamber XX of Human rights and Alliance of Civilizations. The work consists of 1500 m2 of multi-coloured stalactite forms for which the artist uses 100 tons of paint, that appear to be dripping from the ceiling. The chamber was inaugurated by the King and Queen of Spain, U.N. Secretary-General Ban Ki-moon, the prime ministers of Spain and Turkey and the Swiss president Pascal Couchepin.