Crnjanski was born in Csongrád, Hungary, to an impoverished family which moved in 1896 to Temesvár (today Timişoara, Romania). He completed the elementary school in Pančevo, and Grammar school in Timişoara. Then he started attending the Export academy in Rijeka in 1912, and in the autumn of the following year he started studying in Vienna.

At the beginning of World War I, Crnjanski was persecuted as part of the general anti-Serbian retribution of Austria to Princip's assassination in Sarajevo. Instead of being sent to jail, he was drafted to the Austro-Hungarian Army and sent to Galician front to fight against the Russians – where he was wounded in 1915. Crnjanski convalesced in a Vienna war hospital, although just before the end of the war he was sent to the Italian front. After the war, and graduated in literary studies from the University of Belgrade. There he studied under of the literature critic Bogdan Popovic.

After graduating from the Faculty of Philosophy in 1922, he taught at the Fourth Belgrade Grammar School and espoused "radical modernism" in articles for periodicals including Ideje, Politika and Vreme – sparking "fierce literary and political debates".

He entered the diplomatic corps for the Kingdom of Yugoslavia and worked in Germany (1935-1938) and Italy (1939-1941) before being evacuated during WWII to England. He took odd-jobs and eventually became the London correspondent of the Argentinian periodical El economist. During this period he wrote Druga knjiga Seoba (The Second Book on Migration) and Lament nad Beogradom (Lament over Belgrade). He returned to Belgrade after 20 years of exile in 1965 and shortly after published Sabrana dela u 10 tomova (“Collected works in 10 volumes”). In 1971, he received the prestigious NIN award for Roman o Londonu.

Crnjanski, aged 84, died in Belgrade on 30 November 1977. He is interred in the Alley of Distinguished Citizens in the Belgrade New Cemetery.

Crnjanski first books portrayed the futility of war. He laid the foundations of the early avant-garde movement in Serbian literature, as exemplified by his 1920 Objašnjenje Sumatre (The Explanation of Sumatra);

‘The world still hasn’t heard the terrible storm above our heads, while shakings come from beneath, not from political relations, not from literary dogmas, but from life. Those are the dead reaching out! They should be avenged.’

Crnjanski published a large number of works of various subjects and contents:

Some of the works were destroyed by the author himself, while other manuscript of the novel Son of Don Kihot was lost on the way to the print house. Some of his works are said to have been stolen in London. He also wrote many essays, articles and other texts.

Migrations has been translated into English (Harvill 1994, ISBN 0-00-273004-9), but with the author's name transliterated as "Milos Tsernianski". Crnjanski wrote about forty texts about theater. Crnjanski also founded the newspaper Putevi, with Marko Ristić (1922), and Ideje, a political paper (1934). He also published two books of eastern nations poetry anthology. 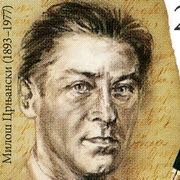 Expert in international law, past member of the Senate of Republika Srpska